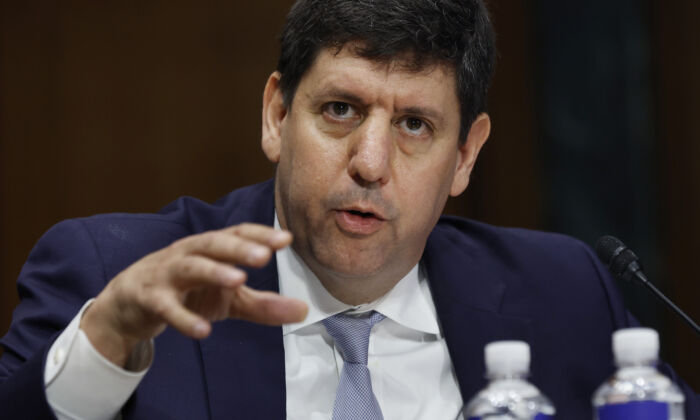 Steven Dettelbach testifies before the Senate Judiciary Committee during his confirmation hearing to be the next director of the Bureau of Alcohol, Tobacco, Firearms, and Explosives in the Dirksen Senate Office Building on Capitol Hill in Washington on May 25, 2022. (Chip Somodevilla/Getty Images)
Democrats

Two Republicans voted for the nominee
By Joseph Lord

The Senate voted on July 12 to confirm Steve Dettelbach as head of the Bureau of Alcohol, Tobacco, Firearms, and Explosives (ATF).

The 48–46 vote broke down mostly along party lines.

They had also helped advance his nomination out of the Senate Judiciary Committee.

Dettelbach is the first Senate-confirmed ATF director in seven years.

Former President Donald Trump’s picks were never voted on because of opposition from senators in his own party.

Dettelbach is a lawyer who served as a U.S. attorney during the Obama administration.

During his confirmation hearing in May Sen. Tom Cotton (R-Ark.) noted that Dettelbach, while running for attorney general of Ohio, once called for a ban on “assault weapons.” Dettelbach said that he could not provide a definition.

Dettelbach said in a written statement that he believes the regulatory scheme should be fair, consistent, and effective. He said he would work to prevent and respond to violent crime if confirmed.

“I promise to do everything that I can do to enforce the law, respect the Constitution, and partner with federal, state, Tribal, and local law enforcement to protect the safety and rights of all law-abiding Americans consistent with the Second Amendment,” he said. “If confirmed, I will take an oath, as all Department employees do, to support and defend the United States Constitution, including the Second Amendment.”

Republicans say Dettelbach was too radical for the ATF post.

“I will always reject activist, extreme nominees, with policy positions that infringe on [West Virginia]’s 2nd Amendment rights,” Sen. Shelley Moore Capito (R-W.Va.) said in a statement after the vote.

Democrats describe Dettelbach as the right person for the job.

“I’m confident Steve Dettelbach is up to the task & I was proud to vote to confirm him,” Sen. Chris Van Hollen (D-Md.) said.