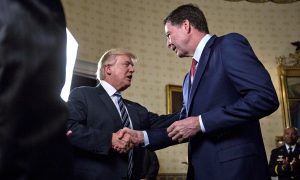 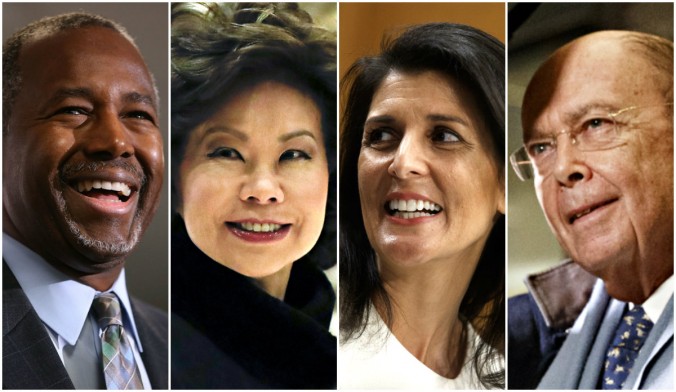 WASHINGTON—Senate committees gave the green light Tuesday to several of President Donald Trump’s picks for Cabinet posts, putting the top-level nominations on a glide path to confirmation just days into the new administration.

But several of Trump’s nominations were moving slowly, escalating the partisan bickering.

Deliberations over two of Trump’s picks turned testy as both nominees faced questions from Democrats over their personal finances. Rep. Tom Price, R-Ga., the president’s choice for health secretary, defended his decision to invest in health care companies as he testified before the Senate Finance Committee.

Panel staffers found Price undervalued around 400,000 shares of stock in Australian drug company Innate Immunotherapeutics that he purchased last August. He reported the shares were worth $50,000 to $100,000, but those shares were worth up to $250,000. Price blamed a “clerical error” and answered “no” when Sen. Ron Wyden, D-Ore., asked if he’d used poor judgment.

Sen. Bernie Sanders, I-Vt., said Trump’s nominee for budget director, South Carolina Rep. Mick Mulvaney, should be disqualified because he failed to pay more than $15,000 in payroll taxes for a babysitter more than a decade ago. Mulvaney said he discovered the unpaid taxes while preparing for the nominating process. He has since paid the taxes.

Ross has specialized in buying distressed companies that still have a potential for delivering profits. He has known Trump for more than 20 years, was an early supporter of his presidential campaign and served as an economic policy adviser to Trump’s team.

Ross also has been critical of the North American Free Trade Agreement with Canada and Mexico, which he blames for a loss of U.S. jobs. He has also accused China of protectionist policies.

Chao, an experienced Washington hand, was labor secretary in President George W. Bush’s administration and deputy transportation secretary under President George H.W. Bush. She is also the wife of Senate Majority Leader Mitch McConnell of Kentucky, and was known to many senators before Trump tapped her for his Cabinet.

Ben Carson, nominated to lead the Department of Housing and Urban Development, won unanimous approval from the Senate Banking, Housing and Urban Affairs Committee. The former Republican presidential candidate and celebrated neurosurgeon would lead a sprawling agency with 8,300 employees and a budget of about $47 billion.

Sen. Michael Crapo of Idaho, the committee’s Republican chairman, praised Carson and his impressive career, saying HUD “will benefit from having a secretary with a different perspective and a diverse background.” Sen. Sherrod Brown of Ohio, the panel’s top Democrat, said he had reservations but welcomed Carson’s promises to address lead hazards in public housing.

The Senate Foreign Relations Committee cleared by voice vote Haley’s bid to be U.S. ambassador to the United Nations. During her confirmation hearing, Haley declared her support for moving the U.S. Embassy in Israel from Tel Aviv to Jerusalem.

Sen. Chris Coons, D-Del., was one of only two Democrats on the committee to oppose Haley’s nomination. Coons said in a statement that Haley didn’t convince him she’s up for the task.

“The position of U.S. ambassador to the United Nations requires a high level of expertise on international affairs, not someone who will be learning on the job,” Coons said.