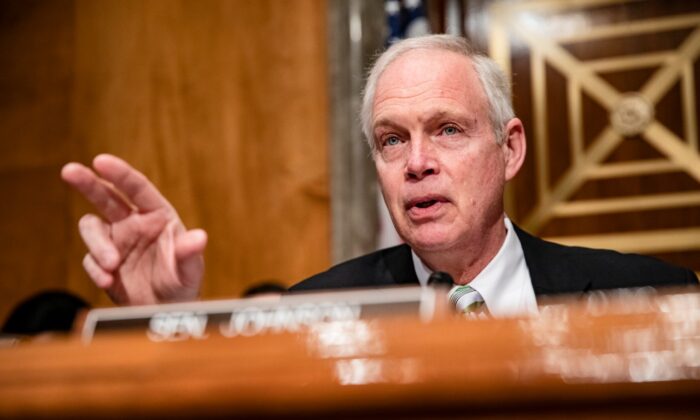 Chairman Ron Johnson (R-WI) speaks at the start of a Senate Homeland Security Committee hearing on the government's response to the CCP Virus outbreak on March 5, 2020 in Washington, DC. (Samuel Corum/Getty Images)
AMERICA

The Senate’s chief oversight committee will be launching an investigation into the origins and response to the CCP virus pandemic, covering the Chinese regime’s role during the early stages of the outbreak in Wuhan.

The Senate Homeland Security and Governmental Affairs Committee will conduct a wide-ranging probe into topics, from how the virus spread in the first place to the World Health Organization’s (WHO) response to the outbreak, committee chairman Ron Johnson (R-Wis.) told Politico on April 13.

The origins of the virus is still unknown. While Chinese officials initially linked the outbreak to a seafood market in Wuhan, they have moved away from this narrative after evidence showed that the first recorded patient on Dec. 1 had not been to the market.

“We need to know what role WHO might have had in trying to cover this thing up,” the chairman added.

The investigation will also look into why the national stockpile of emergency pharmaceuticals and medical supplies wasn’t “better prepared,” and the United States’ dependence on other countries for pharmaceutical ingredients and medical devices, according to Johnson.

Committee member Sen. Rick Scott (R-Fla.) has also been tasked to lead the investigation into the WHO’s handling of the crisis. The body has drawn growing criticism from U.S. lawmakers for their role in aiding the Chinese regime in downplaying the outbreak during the early stages. Many have called on the administration to defund the organization and for the resignation of its director-general, Dr. Tedros Adhanom Ghebreyesus.

“We can’t trust communist China, we’ve learned we can’t trust the WHO because they lie to us,” Scott told Politico, adding that he would delve into when the body knew how the virus was transmitted, and when it grew skeptical of the number of cases reported by the regime.

The WHO was notified of the outbreak on Dec. 31, 2019. Then for almost three weeks, the organization reiterated statements from Chinese officials that there was a low risk of human-to-human transmission. However, reports show that the regime was aware the virus was transmitted between humans before it first confirmed this on Jan. 20.

“Let’s create a new organization if this is important to us because it clearly didn’t work,” Scott said of the WHO.