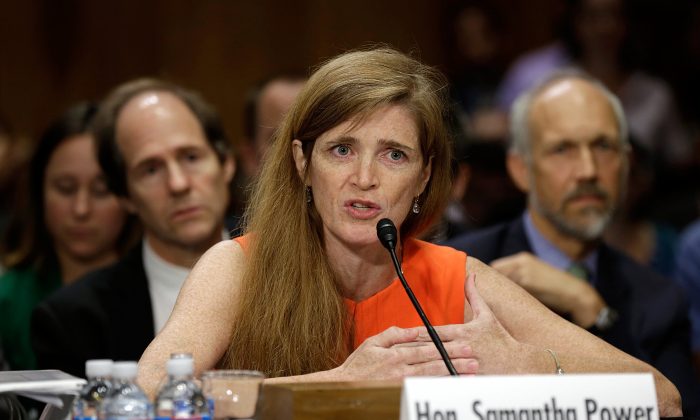 The nomination of Power, a noted academic, author, and adviser to President Obama on human rights, had met with criticism from some lawmakers and members of the Jewish community for previous disparaging remarks she had made about U.S foreign policy and Israel’s human rights record.

But in a confirmation hearing Wednesday, Chairman Robert Menendez (D-N.J.) said the committee had received a letter of endorsement from 30 people representing “a wide variety of political ideology.”

“Much fanfare and some criticism…means you must be doing something right,” Menendez said.

In a positive sign of Senate approval, ranking member Bob Corker (R-Tenn.) was fulsome in his praise.

“I think you are going to be a significant and positive force at the United Nations,” he said.

An Irish born immigrant, Power spent her formative years in Atlanta, where, she noted in her written testimony, that the United Nations was “not a popular topic.” It was there, however, that she witnessed footage of the 1989 Tiananmen Square Massacre in China and resolved to “do what I could the rest of my life to stand up for American values and to stand up for freedom.“

After graduating from Yale, Power worked as a journalist and covered the war in Yugoslavia, returning in 1996 to attend Harvard Law School. She later produced a book, “A Problem from Hell: America and the Age of Genocide,” for which she won the Pulitzer Prize for General Non-Fiction.

More recently Power worked in the Obama administration as Special Assistant to the president and Senior Director for Multilateral Affairs and Human Rights on the National Security Council. In that role she focused particularly on religious freedom and women’s rights. In April 2012, Obama selected her to chair a new Atrocities Prevention Board.

In her testimony Power said she would be “clear eyed about the UN’s flaws as well as its promise.” She cited three key priorities: that the UN remain fair, effective, and focused on human rights and dignity.

“I will be a blunt, outspoken champion of American values and of human rights,” she told the Senate committee.

Noting her reputation for being outspoken, lawmakers questioned her about opinions she had expressed earlier in her career. Marco Rubio (R-Fla.) referred specifically to an article published in the New Republic in 2003 where she wrote that there needed to be “a historical reckoning with crimes committed, sponsored, or permitted by the United States.”

Rubio asked whether she believed America had committed crimes and what sort of reckoning she was referring to.

Power was contrite saying that her thinking had changed since then and particularly since she had been working in the executive branch of government. “We have nothing to apologize for.” she said.

In response to previous criticisms of Israel, Power said the United States has no “greater friend.” She criticized the U.N. for its “disproportionate” focus on Israel.

Power also said the Security Council’s failure to stop Syria’s civil war was a “disgrace that history will judge harshly.”

Menendez said he wanted to bring Power’s confirmation to a vote next Tuesday as the United States was President of the UN Security Council during the month of July and was keen to have her in the seat there.