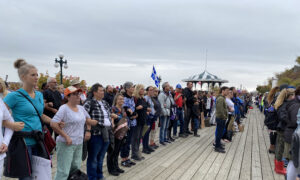 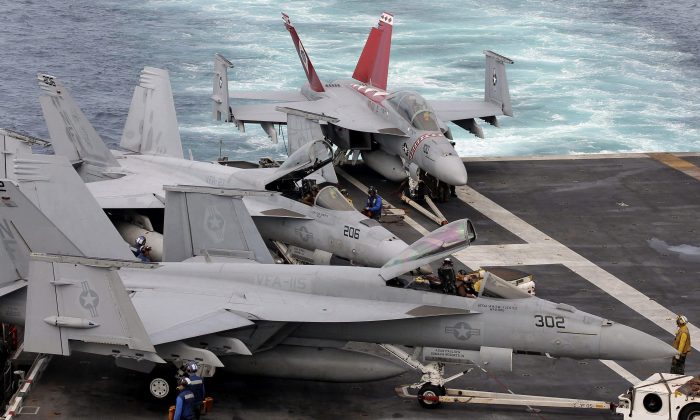 The report was the second in a series published by the committee over the last month, the first of which called on the government to double defence spending to 2 percent of GDP over the next decade.

This latest volume provided a veritable laundry list of items that senators felt the government should buy with the extra $20 billion such an increase in spending would entail.

That included purchasing 12 new submarines, acquiring attack helicopters, and increasing the Air Force fighter-jet fleet to 120, among other things.

The committee also said it had concluded, based on concerns raised by a dozen retired air force officers, that buying 18 Super Hornets to temporarily augment the aging CF-18 fleet was unnecessary.

The government says the Super Hornets are urgently needed because of a shortage of airworthy CF-18s, but opposition critics and others allege the plan is actually part of a larger effort to avoid having to buy the F-35.

The report estimated buying Super Hornets on an interim basis would cost billions and create a ‘significant burden’ on taxpayers and the military.

The committee called on the government to launch a competition to pick a replacement for the CF-18s by June 2018, rather than the five years the Liberals plan to take.

But committee members weren’t completely agnostic about which plane should win.

The report estimated buying Super Hornets on an interim basis would cost billions and create a “significant burden” on taxpayers and the military, the latter because of the need for extra training and infrastructure.

“This burden would be eliminated if the government were to move forward with the selection of the F-35s,” the report said.

While Conservative senator and committee chair Daniel Lang said the report did not presuppose the F-35 would win a competition, he did suggest buying Super Hornets would hamstring the military.

“If we go the route that we’re presently going, it’s going to be a cost of $5–$7 billion,” he told reporters, “and then the Air Force will have an air fleet that is not going to meet the responsibilities that we expect of them.”

The Senate committee’s overall recommendations would see the military expand to a size unprecedented since the Cold War, for which Lang was unapologetic.

“It is ambitious,” he said. “But the world has changed, and the day of the free ride is over.

The committee’s report comes as the government prepares to unveil its highly anticipated defence policy, which the Liberals have suggested will address years of underfunding to the military.

The report’s release also came as the Conservatives used one of their opposition days in the House of Commons to focus several hours of speeches on Defence Minister Harjit Sajjan’s credibility, a debate which culminated in a largely symbolic vote on May 9.

Sajjan, a former reserve soldier and Afghan war veteran, has faced days of verbal fire for exaggerating his role in Operation Medusa, a key battle involving the Canadian Forces in Afghanistan in 2006.

The minister has apologized, but the Conservatives say he also misled Canadians on other issues, such as the urgent need for Super Hornets and cuts to tax benefits for soldiers deployed to Kuwait.

Sajjan refused to be drawn into the debate and instead spent about 20 minutes re-reading a speech he had delivered to defence industry representatives and experts last week.

“I am focused on making sure that we support our men and women in the Canadian Armed Forces.”