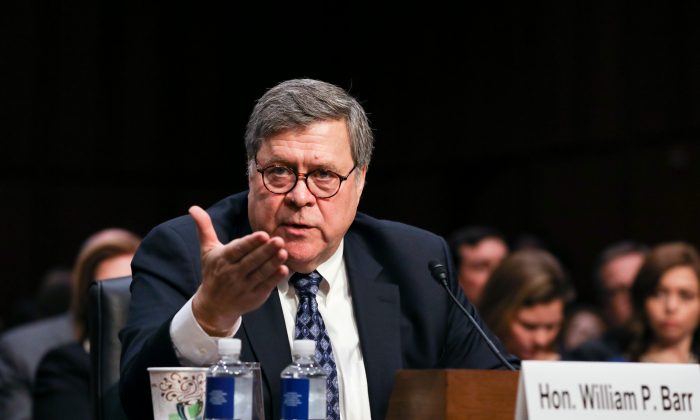 Attorney General nominee William Barr testifies on the first day of his confirmation hearing in front of the Senate Judiciary Committee at the Capitol in Washington on Jan. 15, 2019. (Charlotte Cuthbertson/The Epoch Times)
US News

The Senate Judiciary Committee has approved President Donald Trump’s pick for attorney general, William Barr, on Feb. 7. His nomination now heads to the full Senate, where Barr is expected to be confirmed.

Barr’s nomination was passed along party lines, where 12 Republican senators voted for the nomination and 10 Democrats voted against it. Republicans praised Barr as well qualified, while Democrats had largely opposed his nomination, saying that they were concerned he would not fully release the findings of special counsel Robert Mueller’s Russia investigation.

NEWS: @SenJudiciary Committee votes to advance the nomination of #BillBarr to be the Attorney General of the United States. pic.twitter.com/K0VOh8Rikl

If Barr, 68, gets confirmed, he would replace Jeff Sessions, who resigned at Trump’s request a day after the November midterm elections. The office is being held in the interim by the former chief of staff under Sessions, Matthew Whitaker. Barr would inherit a department that under Sessions’ leadership sought to implement Trump’s tough stance on illegal immigration and operations against human trafficking, drug trafficking, and transnational gangs, particularly MS-13.

He would also oversee the special counsel investigation into allegations that the Trump campaign colluded with Russia to sway the 2016 election. Recently, there have been signs that the investigation is nearing its end after a year and a half and a slew of indictments, none of which have substantiated the allegations.

Barr was first recruited by late President George H. W. Bush to join the Justice Department in 1989. He then served as attorney general from 1991 to 1993, where he “provided legal reasoning used by the administration to justify the invasion of Panama and the arrest of Manuel Antonio Noriega,” The Washington Post reported in 1991. “He also wrote an opinion [piece] that states the administration has the power to arrest terrorists overseas, even in violation of international law.”

Before that, he served as deputy attorney general in the Justice Department, and in the CIA while attending law school. Toward the end of his time at the agency, he “occasionally helped write [a] testimony for the [CIA] director,” who, at the time, was Bush, the paper said.

After leaving the Bush administration, Barr returned to private practice.

On Dec. 7, President Trump said he would nominate Barr to return to lead the Justice Department.

“He was my first choice from day one,” Trump said at the time.

Trump said he hoped for a quick confirmation of Barr by the Senate, calling the man “one of the most respected jurists in the country” and “a terrific man.”

Barr’s Views on the Mueller Probe

During his confirmation hearing before the Senate Judiciary Committee on Jan. 15, Barr addressed how some of his positions were portrayed in the media, particularly regarding the Mueller probe.

He said he took issue with the probe on only two points: Mueller should have had a greater balance of political leanings on his team (most of the team donated to Democrats), and the Mueller team was incorrect in considering a potential obstruction of justice case against Trump.

Mueller was appointed in 2017 by Deputy Attorney General Rod Rosenstein to take over an FBI probe of Russian interference into the 2016 elections, as well as allegations that Trump’s presidential election campaign had colluded with the interference. But so far no evidence of collusion has emerged.

Barr said based on public information, he was under the impression that Mueller was planning to raise the claim that Trump obstructed justice by firing then-FBI Director James Comey in 2017 and by telling Comey he “hoped” Comey could “let … go” of further inquiries into former National Security Advisor Michael Flynn. Trump denied making such a comment.

Barr argued the obstruction statute did not pertain to Trump’s actions and warned about “serious adverse consequences” of “stretching the statue beyond what was intended.”

Aside from that Barr said it is “vital” Mueller is free to finish his work.

“I think we have to get to the bottom of it,” he said, referring to the Russian meddling.

“I believe it is in the best interest of everyone, the President, Congress, and most importantly, the American people, that this matter be resolved by allowing the Special Counsel to complete his work,” Barr said during the confirmation.

“I can assure that, where judgments are to be made by me, I will make those judgments based solely on the law and I will let no personal, political, or other improper interests influence my decision,” he added.

He said he has known Mueller for 30 years and trusts him to conduct the investigation properly and fairly to the president.

Barr committed to releasing as much of the expected Mueller report as laws and regulations allow and promised Trump will not rewrite the report.

Epoch Times Petr Svab and Reuters contributed to this report.