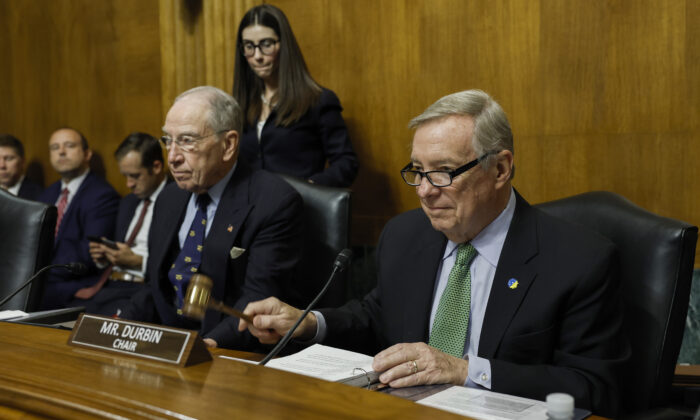 The Senate Judiciary Committee on Sept. 22 advanced a proposal that would allow media outlets to form cartels to negotiate with Big Tech platforms.

The bill, dubbed the Journalism Competition and Preservation Act (JCPA), has as many opponents as it has supporters among media outlets and media advocacy groups.

Specifically, the complicated measure would supersede some existing antitrust laws and allow media companies to negotiate collectively with Big Tech platforms such as Facebook, Google, and Twitter.

That means those online and print media outlets, including some of the largest and longest-established names in the industry, could band together in a kind of media union to demand concessions from tech companies in order for the coalition to continue to allow their content on the platform. Under existing antitrust laws, such cartels—which describe a collusion of firms in an industry that have joined together for a common financial or industry outcome—are decidedly illegal.

Proponents of the JCPA have presented it as a much-needed panacea to address the dwindling number of dedicated local media companies that, proponents say, are often left behind in the umbrella of Big Tech algorithms and advertising capacity.

However, critics of the cartel bill have warned that the measures in the JCPA could serve to further the interests of legacy and mainstream media outlets against independent and anti-establish outlets.

Specifically, opponents point to a section of an updated draft of the JCPA that could effectively permit legacy media cartels to demand that tech platforms censor newer or less-established media outlets, or outright refuse to allow them on the platform.

Under the text of the legislation, media cartels’ negotiations with tech platforms must go beyond mere monetary concessions.

In practice, critics fear that this could allow legacy media outlets to demand that smaller outlets disseminating “misinformation” or “fake news”—which many on the right see as a thinly veiled catch-all term intended to delegitimize conservative media outlets—be barred from publishing content on tech platforms.

Technically, the legislation ensures that this won’t happen.

Under the terms of the measure, coalitions of media outlets banding together to collectively bargain can’t exclude outlets from the cartel on grounds related “to the size of an eligible digital journalism provider or the views expressed by its content.” In other words, the cartels can’t exclude members from the negotiating table because they’re considered too small or because their expressed beliefs go outside of the political mainstream.

But critics say that the grounds that are permissible to exclude an outlet—including an outlet’s “trustworthiness,” “extremism,” “misinformation,” “hate speech,” “conspiracy,” “expertise,” “authoritativeness,” and others—could allow media cartels to bar newer or anti-establishment media outlets from negotiations, given the relatively subjective nature of such criteria.

With its passage by the Senate Judiciary Committee, the bill is now primed for consideration by the larger Senate, where it seems on track to pass.

Republicans Split on the Issue

The bill’s advancement through the Judiciary Committee was helped in part by the support of several Republicans, including Sens. John Kennedy (R-La.), Lindsey Graham (R-S.C.), and Ted Cruz (R-Texas).

Republicans have been divided on the bill in the past. Though Graham and Kennedy were among the sponsors of the JCPA, the legislation has been blasted as “the antithesis of conservatism” by House Minority Leader Kevin McCarthy (R-Calif.).

“Attempts by big media and Democrats in Congress to collude and monopolize economic models poses a tremendous threat to free speech and a free press,” McCarthy told Breitbart News.

“Never before has the opportunity been as open for startup news outlets as it is today. Americans now have more choices to get information and make decisions for their communities and elected leaders. That makes Democracy stronger and creates a whole new class of entrepreneurs that will also drive job growth. As we have seen in other industries, disrupters make legacy players uneasy and those legacy players are often willing to do whatever it takes to hold onto their market share and power.

“This is the antithesis of conservatism, and House conservatives will fight for an open and free market—especially one that advances free speech and a free press.”

In a statement following the Judiciary Committee’s passage of the legislation, Kennedy presented the bill as a win for conservative and independent media outlets against Big Tech.

“Tech Goliaths like Facebook and Google are strangling smaller conservative publications by keeping them from making a profit on online platforms,” Kennedy argued. “The manipulation is squashing free speech. This bill bars Big Tech firms from throttling, filtering, suppressing or curating online content while providing local news outlets with a fair playing field to negotiate against these censorship giants.”

Ultimately, the bill passed the Judiciary Committee with the support of most of the committee’s members—including most committee Republicans—voting in favor of the legislation.

Despite condemning the bill as essentially useless, Sen. Mike Lee (R-Utah) joined 10 of his Republican colleagues in voting for the legislation to advance. Sen. Josh Hawley (R-Mo.) was the sole Republican on the committee to vote against the bill.

In a surprise switch, Cruz voted in favor of the legislation after initially opposing it on grounds that it could further enable censorship of independent and conservative outlets.

During a Sept. 8 meeting of the Judiciary Committee, Cruz put forward an amendment that he claimed would force negotiations to center purely on fair market value ad revenue.

Proponents have long cited that element as grounds for their support of the legislation, as there have long been concerns that Big Tech platforms are profiting from the published content of small and local media groups without fair compensation.

Still, concerns have persisted over the potential for collusion between Big Tech and legacy media to the detriment of independent publications.

On Sept. 8, Cruz cited these concerns as grounds for his opposition to the bill and put forward an amendment that he said would ensure that such issues didn’t arise.

“If you’re negotiating, you ought to be negotiating on the ostensible harm that this bill is directed at, which is the inability to get revenues from your content,” Cruz said at the time. “You should not be negotiating on content moderation and how you are going to censor substantive content.

“This bill simply says the topic of discussion, when these two sides get together, can’t be censorship. It should be ad revenues, which is what all of the discussion of this markup has focused on.”

Sen. Amy Klobuchar (D-Minn.), the proposal’s main sponsor, countered Cruz’s claim with her own contention that the bill’s intent was never to keep some viewpoints and outlets away from the negotiating table or censored further by Big Tech.

“This is simply about negotiating prices,” Klobuchar said on Sept. 8. “This was never the intent of the legislation, to get at content. The goal of the bill is to allow local news organizations to get compensation when major titans like Facebook and Google access their content. It wasn’t about facilitating negotiations about content.”

Klobuchar ultimately offered Cruz an amended draft of the bill that satisfied Cruz’s concerns, and on Sept. 22, he joined his colleagues in advancing the measure.

Nevertheless, concerns remain that the subjective nature of the grounds permitted to exclude an outlet from a cartel could harm independent outlets with views outside of the political mainstream, to the benefit of establishment and mainstream outlets.

Now that Cruz’s objections have been addressed, the measure will advance to the full Senate for consideration sometime in the coming days and weeks.

Because the bill won the support of 11 committee Republicans, it’s likely that it will have little trouble in overcoming the 60-vote filibuster threshold.