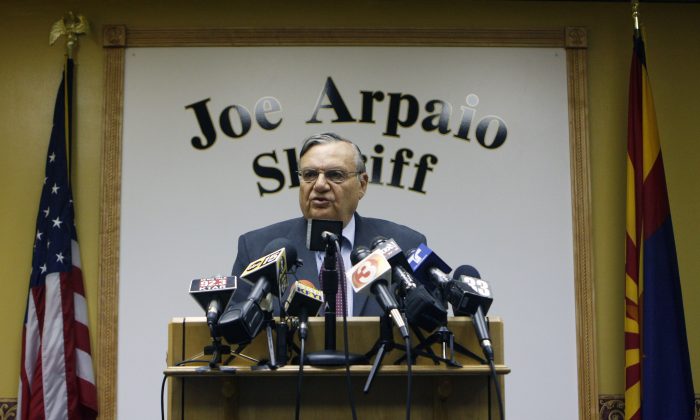 Arpaio repeated his team’s 2012 finding that the certificate was forged during an interview with CNN on Wednesday.

“I started this because of a fake document,” Arpaio said in response to the host’s claim that he was trying to delegitimize Obama. “I didn’t care where the president came from.”

The Obama administration posted an electronic file on the White House website in 2012. Mike Zullo, head of the Arpaio Cold Case Posse, headed into an investigation into the file. That probe concluded that the file was put together in several pieces rather than being scanned whole into a file, the East Valley Tribune reported.

“We have the evidence,” Arpaio told CNN. “Nobody will talk about it. Nobody will look at it. Anytime you want to come down, and anybody, we’ll be glad to show you the evidence.”

Arpaio didn’t stop there, hinting that more revelations about the document would emerge.

“And by the way, you’re going to hear more about this fake, phony birth certificate,” he said.

Arpaio announced his run for the Arizona US Senate seat on Tuesday. Arpaio gained national attention for his tough stance on illegal immigration as Maricopa County Sheriff, earning the moniker “America’s toughest sheriff.”

Arpaio is a close ally of President Donald Trump and was one of the first to endorse his candidacy for president. Trump pardoned Arpaio in August after the former sheriff was found guilty of defying a court order in course of doing his job.

Trump has also questioned the authenticity of Obama birth certificate for years. Trump gave up that claim on the campaign trail, but The New York Times reported that his still privately wonders about it.

When queried about Trump rescinding his doubt that Obama was born in the United States, Arpaio clarified that the president never gave a final statement about the authenticity of the birth certificate.

“No doubt about it. We have all the evidence,” Arpaio said. “It’s a phony document.”

A high-resolution version of Obama’s birth certificate can be downloaded from the White House website.