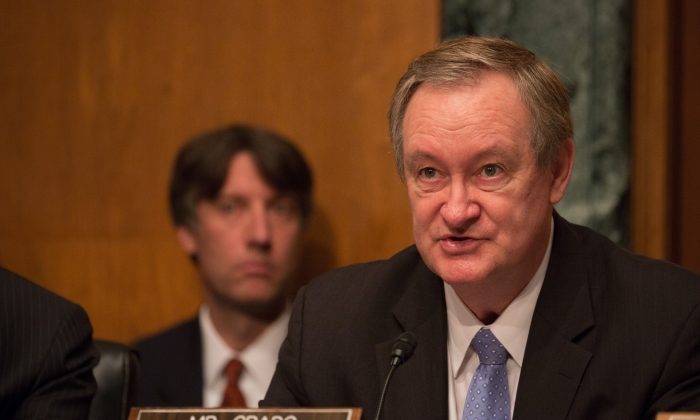 A Republican senator blocked a bill aimed at preventing election meddling in the United States, saying the measure, sponsored by Sen. Chris Van Hollen (D-Md.) is actually designed to attack President Donald Trump. He also argued new sanctions would do more damage to the United States and its allies than Russia.

“The mechanisms in this bill have been designed more to attack the Trump administration and Republicans than to attack the Russians and those who would attack our country and our elections,” Sen. Mike Crapo (R-Idaho) said. “When we can stop trying to make it anti-Trump or anti-Republican or make politics out of the problems that Russia truly is creating for us, maybe we can come together and pass yet another strong piece of legislation to move forward,” he said, the Idaho Press reported.

“I agree and have agreed that we can work on further legislation, but we need to get it right because economic sanctions legislation is a two-edged sword,” he said, reported the Washington Times. “It hurts the United States and our allies often as much as it hurts the entities sanctioned, and because of that we have to have the ability to be flexible and when to apply, how to apply and how to adjust the impact of our sanctions. Otherwise, we will see that we will do more damage to ourselves and our allies than to Russia.”

“I think that President Trump has probably put more sanctions on the Russians than any president in our history,” Crapo said, The Hill reported. Sanctions, he argued, are a “two-edge sword.”

Van Hollen sought unanimous request from the Senate to fast-track the bill. Crapo objected and prevented it from moving forward.

“I think the record really needs to be set straight here. The picture that is being painted here is that the Republicans or President Trump or both don’t care about the fact that Russia is and has been trying to interfere in our election. And that for some reason our refusal to allow this specific act to move forward until it is fixed is in evidence of that,” Crapo, who chairs the Senate Banking Committee, said, according to the Idaho Press.

Van Hollen asked for consent to pass the Defending Elections from Threats by Establishing Redlines, or DETER Act. He argued the bill would underscore that there would be a “very tough price to pay” if Russia meddles in American elections.

Sen. Marco Rubio (R-Fla.) co-sponsored the measure. The bill would allow the federal government to impose new sanctions on foreign countries assessed to have attempted to interfere in U.S. elections and would potentially penalize Russia.

“This has nothing to do with President Trump. This has to do with protecting our elections,” Van Hollen said, The Hill reported. “The whole purpose of this bill is to have sanctions that are tough enough so that [Russian President Vladimir] Putin doesn’t interference or another foreign government doesn’t interfere,” he also said, reported the Washington Times.

The Departments of Defense, Justice, and Homeland Security issued a statement last month that Russia, China, and Iran could interfere in next year’s elections.

“Russia, China, Iran, and other foreign malicious actors all will seek to interfere in the voting process or influence voter perceptions,” a joint statement read from the agencies. “Adversaries may try to accomplish their goals through a variety of means, including social media campaigns, directing disinformation operations, or conducting disruptive or destructive cyberattacks on state and local infrastructure.”

Russian President Vladimir Putin has denied interfering in the 2016 race. And while some U.S. officials said that Russia interfered in the last election, special counsel Robert Mueller found that President Donald Trump’s campaign did not collude with Russian assets, despite wall-to-wall media coverage and claims made by Democratic members of Congress.