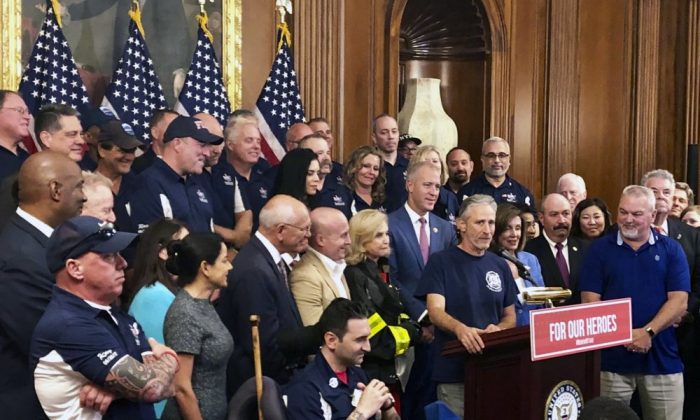 Entertainer and activist Jon Stewart, speaks at a news conference on behalf of 9/11 victims and families, at the Capitol in Washington, on July 12, 2019.(Matthew Daly/AP Photo)
Politics

WASHINGTON—The Senate gave final legislative approval on July 23 to a bill ensuring that a victims’ compensation fund related to the Sept. 11 attacks never runs out of money.

The 97-2 vote sends the bill to President Donald Trump, who is expected to sign it.

The bill would extend through 2092 a fund created after the 2001 terrorist attacks, essentially making it permanent. The $7.4 billion fund is rapidly being depleted, and administrators recently cut benefit payments by up to 70 percent.

The Congressional Budget Office estimates the House-passed bill would result in about $10.2 billion in additional compensation payments over 10 years, including more than $4 billion for claims already filed.

Senate Democratic Leader Chuck Schumer of New York said the bill guarantees “once and for all that the heroes who rushed to the towers 18 years ago will no longer have to worry about compensation for their families when they’re gone.”

First responders “won’t have to return to Congress anymore to fight for the compensation they always should have been given,” Schumer said. “They will be able to go home, attend to their illnesses, their family members, their friends. That’s what they always wanted to do, just take care of themselves and their families.”

The legislations makes “solemn commitments” to firefighters, police officers and other first responders who “rushed selflessly toward the World Trade Center” just moments after the 2001 terrorist attacks began, McConnell said.

“Congress can never repay these men, women, and families for their sacrifices. But we can do our small part to try and make our heroes whole,” McConnell said on the Senate floor. “That’s why the Senate has never failed to attend to the (victims’) fund before. We weren’t about to do so now.”

The collapse of the World Trade Center in September 2001 sent a cloud of thick dust billowing over Lower Manhattan. Fires burned for weeks. Thousands of construction workers, police officers, firefighters, and others spent time working in the soot, often without proper respiratory protection.

In the years since, many have seen their health decline, some with respiratory or digestive-system ailments that appeared almost immediately, others with illnesses that developed as they aged, including cancer.

More than 40,000 people have applied to the September 11th Victim Compensation Fund, which covers illnesses potentially related to being at the World Trade Center site, the Pentagon or Shanksville, Pennsylvania, after the attacks. More than $5 billion in benefits have been awarded out of the $7.4 billion fund, with about 21,000 claims pending.

Stewart, a longtime advocate for 9/11 responders, had sharply criticized Congress for failing to act. He told lawmakers at an emotional hearing last month that they were showing “disrespect” to first responders now suffering from respiratory ailments and other illnesses as a result of their recovery work at the “pile” of rubble left by the 2001 attacks.