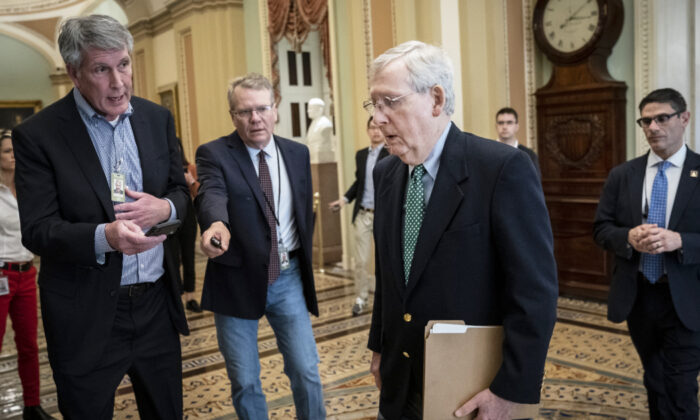 The Senate on March 16 agreed to a 77-day extension of a set of FBI surveillance tools under the Foreign Intelligence Surveillance Act (FISA) that had expired March 15, to allow lawmakers time for further negotiations on necessary reforms to the powerful domestic eavesdropping program that saw wiretapping of individuals in the Trump campaign.

The measure, which extends and updates domestic surveillance rules under FISA, is retroactive to March 14. It must still pass the Senate and requires the signature of President Donald Trump before it can become law.

The Senate had been scheduled to hold an initial procedural vote on March 16 on a bill passed in the House of Representatives last week that would have reauthorized and reformed some of the program.

Instead, senators, led by Senate Majority Leader Mitch McConnell (R-Ky.), unanimously agreed on the temporary extension to allow further consideration for amendments to the House bill.

The role of the FISA Court has become a subject of controversy.

President Donald Trump’s supporters have called for FISA reforms after the Justice Department’s Inspector General Michael Horowitz in December 2019 issued a report that faulted the FBI for “at least 17 significant errors and omissions” in applications submitted to the FISA court when it sought to wiretap Trump’s former campaign adviser Carter Page as part of its investigation into alleged contacts between Trump’s campaign and Russia—a narrative that has since been discounted by the Mueller report.

Trump, who has said that surveillance tools covered by the legislation were improperly used against his 2016 campaign, has demanded tighter controls on authorities allowed under the law.

Backers of the program consider it an essential tool for intelligence agencies’ efforts to fight terrorism.

The bill passed in the House was written with Attorney General William Barr, considered one of Trump’s strongest defenders. But it failed to pass opposition in the Senate without votes on the amendments.

Sen. Rand Paul (R-Ky.) is expected to push for a Senate vote on a proposal to block FISA warrants from being used against Americans. Meanwhile, Sen. Mike Lee (R-Utah) is expected to propose an amendment that would strengthen legal protections for targets of surveillance, The Hill reported.

Sen. Ron Wyden (D-Ore.), who serves on the Senate Intelligence Committee, on March 16 pushed for an amendment that would put an end to web browser surveillance and one that would establish independent oversight of the FISA process.

Barr voiced his support on March 11 for the passage of the House bill, reauthorizing the FISA.

“It is of the utmost important that the Department’s attorneys and investigators always work in a manner consistent with the highest professional standards, and this overall package will help ensure the integrity of the FISA process and protect against future abuses going forward,” Barr said.