Senate Adjourns for Weekend, No Deal on Small-Business Pandemic Program 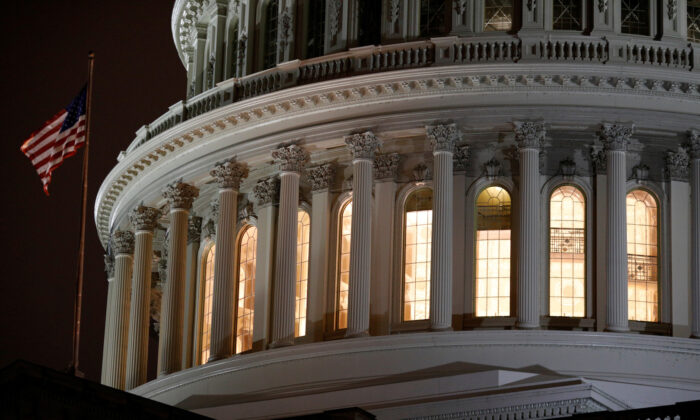 The U.S. Capitol Building as seen ahead of a vote on the coronavirus (COVID-19) relief bill on Capitol Hill in Washington on March 25, 2020. (Tom Brenner/Reuters)
By Jack Phillips

The Senate on Thursday adjourned for the weekend as party leaders continue to grapple on how to handle small business funding during the pandemic.

The upper chamber of Congress held a pro forma session Thursday. Senate Majority Leader Mitch McConnell (R-Ky.) didn’t attempt to pass a bill to fund a small-business program even though it ran out of money that day, saying there has been “absolutely no progress.”

“This morning, the program ran out of money and shut down, just as we’d warned. But even now, Senate Democrats are still blocking funding. Every Senate Republican was ready to act today, but Democrats would not let us reopen the program,” McConnell said on the Senate floor. According to The Hill, which reported on the Senate’s adjournment, he was referring to the Paycheck Protection Program (PPP).

“It is surreal to see Democratic leaders treat support for workers and small businesses as something they need to be goaded into supporting. This should be above politics,” McConnell added. “I hope our colleagues come around soon.”

The House of Representatives will hold a session on Friday.

Democrats have said they oppose certain provisions of the GOP’s $250 billion addition to the fund.

“It’s not that we don’t share the values of small businesses, we do, we have been their champions,” Speaker Nancy Pelosi (D-Calif.) told reporters on Thursday. “But in order for them to succeed, people have to be well, people need to be safe and we need to have state and local [funding].”

It came as the PPP rescue fund—set up during last month’s $2.2 trillion stimulus package—had used up its $350 billion funding capacity. The Small Business Administration (SBA) will now be unable to approve more loans through the program.

The SBA on Thursday explained that it is “unable to accept new applications for the Paycheck Protection Program based on available appropriations funding,” adding that “we are unable to enroll new PPP lenders at this time.”

Treasury Secretary Steven Mnuchin and SBA Administrator Jovita Carranza on Wednesday said that no new approvals can be issued once the PPP exhausts its funds.

“The SBA has processed more than 14 years’ worth of loans in less than 14 days,” the two officials said, while calling on Congress to infuse the program with more funds because it’s “saving millions of jobs and helping America’s small businesses make it through this challenging time.”