Senate Acquits Trump on Both Articles of Impeachment 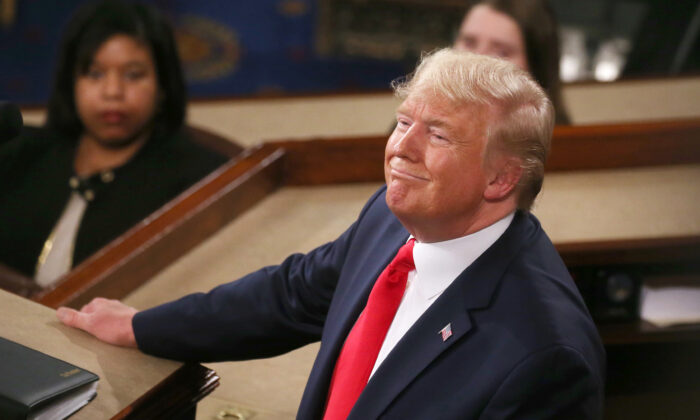 U.S. President Donald Trump delivers the State of the Union address at the chamber of the House of Representatives in Washington on Feb. 4, 2020. (Mario Tama/Getty Images)
By Ivan Pentchoukov

The Senate voted to acquit President Donald Trump on both articles of impeachment on Feb. 5, ending the third impeachment trial in U.S. history.

The senators voted nearly along party lines to acquit the president of the two charges against him: abuse of power and obstruction of Congress.

The senators voted 52–48 on the first article of impeachment and 53–47 on the second article.

“The Senate, having tried Donald Trump, president of the United States, upon two articles of impeachment exhibited against him by the House of Representatives, and two-thirds of the senators present not having found him guilty of the charges contained therein: it is, therefore, ordered and adjudged that the said Donald John Trump be, and he is hereby, acquitted of the charges in said articles,” said Chief Justice John Roberts, who presided over the trial.

“The president is guilty of an appalling abuse of public trust,” Romney said on the Senate floor before the final vote. “What the president did was wrong, grievously wrong.”

“This decision is not about whether you like or dislike this president,” Collins said before the vote.

The Senate’s vote capped off four months of proceedings that began with an announcement by House Speaker Nancy Pelosi on Sept. 24, 2019. Following a rapid inquiry in the House, Democrats impeached the president in a partisan vote on charges of abuse of power and obstruction of Congress.

“The United States Senate was made for moments like this,” Senate Majority Leader Mitch McConnell (R-Ky.) said on the floor of the Senate before the final vote. “The Framers predicted that factional fever might dominate House majorities from time to time. They knew the country would need a firewall to keep partisan flames from scorching our Republic.”

Acquittal in the trial was all but assured with Republicans holding a 53–47 majority in the Senate; a supermajority of 67 votes on each article was needed to convict.

In a speech before the vote, Senate Minority Leader Chuck Schumer (D-N.Y.) accused the Republicans of covering up for the president.

“The House managers established the president abused the great power of his office to try to cheat in an election and the Senate majority is poised to look the other way,” Schumer said.

During the Senate trial, Democratic impeachment managers accused Trump of abusing the power of his office by pressuring Ukraine to investigate his political rivals, including former Vice President Joe Biden. The Democrats alleged the president leveraged a hold on $400 million in aid to Ukraine to pressure Ukrainian President Volodymyr Zelensky to do his bidding and that once Congress began investigating the alleged scheme, Trump obstructed the inquiry.

Trump’s attorneys, led by White House counsel Pat Cipollone, argued that the Democrats failed to prove their case, highlighting the lack of firsthand witnesses who could back up the claims.

Throughout the impeachment inquiry and Senate trial, Trump denounced the proceedings as a partisan “hoax.” The president has pointed to the transcript of his July 25, 2019, call with Zelensky as the ultimate evidence of his innocence.

On the call, Trump asked Zelensky to “look into” the firing of Ukraine’s top prosecutor, Viktor Shokin. Two weeks before Shokin was pressured to submit his resignation, his office had seized the assets of Mykola Zlochevsky, the owner of Ukrainian gas giant Burisma. At the time, Hunter Biden, Joe Biden’s son, held a lucrative position on the board of directors of Burisma. Joe Biden has since bragged, on multiple occasions, that he forced Shokin’s firing by threatening to withhold $1 billion in aid to Ukraine.

While Joe and Hunter Biden have denied any wrongdoing, Hunter Biden admitted he exercised poor judgement by joining the board while his father was vice president. Joe Biden on Feb. 2 also conceded when asked during an interview with NBC’s “Today Show” that it was a “bad image.”

Former national security adviser John Bolton added a twist to the trial when claims from his unpublished book were leaked to the press. In the book, Bolton reportedly claimed to have firsthand knowledge of Trump’s involvement in the alleged campaign to pressure Ukraine.

Democrats abandoned their pursuit of Bolton’s testimony during the House inquiry, but revived the calls after the contents of the book were leaked. Republicans rejected calling on Bolton and other additional witnesses.

The rationale for the Republicans who voted “not guilty” mainly fell in two categories. Some said the Democrats failed to prove their case, while others argued that even if the case was proven, the charges brought were not impeachable.

Trump didn’t mention the impeachment during an optimistic State of the Union address on the night before the acquittal vote. In a sign of how impeachment widened the schism between the two parties, Trump didn’t shake Pelosi’s outstretched hand prior to the speech. As Trump concluded his address, Pelosi ripped up a copy of the president’s prepared remarks.

The president’s acquittal comes two days after the first 2020 presidential primary contest in Iowa. The Democrats alleged that Trump’s overture to Ukraine constituted an attempt to interfere in the 2020 election. While Trump scored a handy victory in Iowa on Feb. 3, Iowa Democrats were yet to report on the final results of the caucuses by the time Trump was acquitted on the afternoon of Feb. 5. Party officials blamed the delay on problems with a mobile app used to report caucus results.

Trump’s approval rating, which has fluctuated in the mid- to low-40s, hit a new high of 49 percent in the latest Gallup polling, which was conducted as the Senate trial was drawing to a close. The poll found that 51 percent of the public views the Republican Party favorably, the first time the GOP’s number has exceeded 50 percent since 2005.