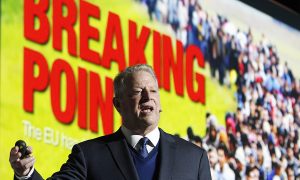 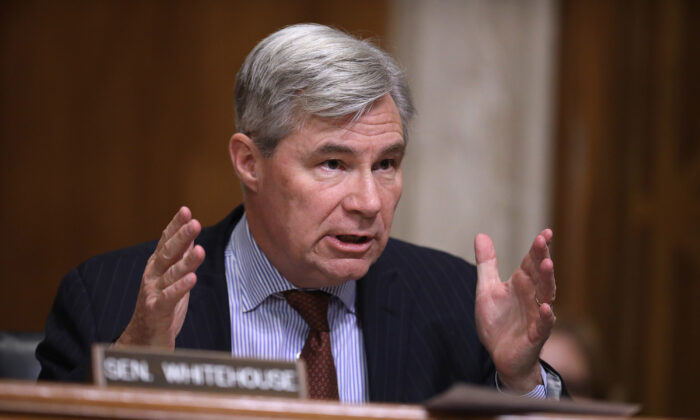 Whitehouse broached the possibility of suppressing the speech of and possibly prosecuting climate dissenters as far back as 2015 in a Washington Post article. His home state’s largest paper, The Providence Journal, called the senator to the carpet for this threat, writing:

“A civil proceeding by the government, as well as a criminal one, is a form of prosecution. While we strongly believe humans are contributing to climate change, it is our position that disagreements about policy issues and scientific theories should not be turned into grounds for investigations by government officials into supposed fraud, because that undermines the First Amendment and has a chilling effect on free speech. We believe, with the founders who listed this essential freedom first in the Bill of Rights, that open discussion and disagreements are healthy, allowing people to learn, grow and embrace or reject new ideas, as well as to safely challenge the misconduct of government officials and other forms of injustice.”

Whitehouse should be especially sensitive to concerns that his actions as a senator would endanger free speech and open debate. When he became a senator, he swore an oath to uphold and defend the Constitution of the United States, which includes the First Amendment that ensures, among other things, the rights of free speech and association and the right to dispute government policies.

In addition, the state that Whitehouse represents was founded by dissenters—people fleeing neighboring states (colonies at the time) where their religious and political views were being suppressed through the force of law.

Whitehouse’s quest for the title of Grand Climate Inquisitor, continues to this day. Paul Driessen has noted that Whitehouse recently said that if Democrats win Georgia’s two U.S. Senate seats, allowing them to hold a slim majority in the Senate, it “would enable him and his colleagues to launch investigations, haul climate realists before committees [for star-chamber show trials], and even employ grand juries and criminal prosecutions—to intimidate, silence and punish climate crisis nonbelievers.”

Sadly, Whitehouse is far from being alone in his authoritarian quest to squelch debate over the causes and consequences of, and policy responses to, climate change. Obama administration Attorney General Loretta Lynch testified before the Senate Judiciary Committee in 2016 that the Department of Justice had discussed pursuing legal action against companies, research institutes, and scientists who debate whether humans are causing catastrophic climate change.

Before that, Robert Kennedy Jr. called for trying climate realists as war criminals, a proposal TV personality Bill Nye said was worth considering, because it would cause “a chilling effect on scientists who are in extreme doubt about climate change, I think that is good.”

Media talking heads all too often decry the First Amendment’s acknowledgment of an inherent freedom of speech, while cloaking themselves in its protections of press freedom when it comes to expressing their own opinions or protecting sources. Social networking platforms such as Facebook, Google, Twitter, and YouTube often and openly censor speech or positions—including the view that humans may not be causing dangerous climate change—that their founders or advertisers don’t like, despite claiming under law that they are neutral platforms for the free exchange of ideas.

This is troubling and should lead people to question the value of continuing to listen to or use such media outlets or social media platforms.

Even worse, though, is when people in political authority, people with guns and prisons backing them up, call for suppressing scientific or political speech. That should spark outrage in Americans of all political and social persuasions.

For centuries, educated people believed illnesses were caused by an imbalance of “humors” (fluids) in the body, the world was flat, and the Earth was the center of the universe. Those people were wrong; however, they were not frauds.

Everyone who currently disputes that humans are causing dangerous climate change could be completely wrong and may be shown to be so as more evidence comes in. Similarly, those who believe fossil fuel use is causing a climate apocalypse could be wrong. But being wrong on a scientific matter doesn’t constitute fraud. Debate is the scientific method in action.

By raising the specter of prosecution, Whitehouse and his ilk are trying to silence those who disagree with them on climate matters. This vile effort undermines free speech and open debate, the underpinnings of successful democracies and the scientific method alike.

When government can dictate which questions are open or closed—in either the political sphere or the scientific realm—the gulags cannot be far behind.

Sterling Burnett, Ph.D., is the managing editor of Environment & Climate News at The Heartland Institute.