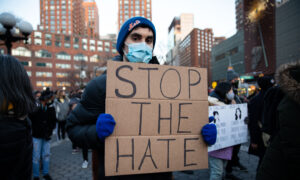 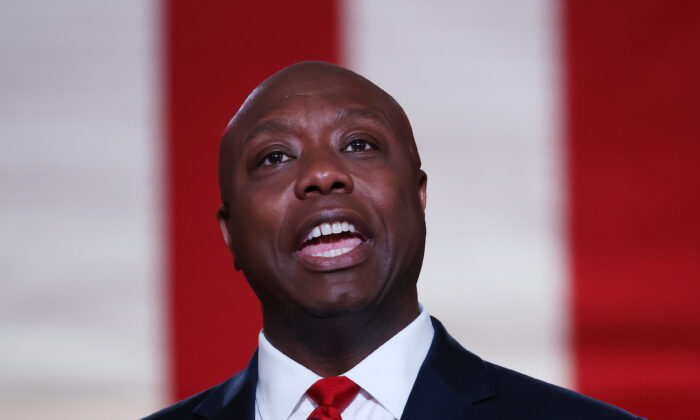 In yet another rebuke of what he called “woke supremacy,” Sen. Tim Scott (R-S.C.) denounced “the ‘tolerant’ left’s intolerance of dissent” by highlighting an example of a Democrat senator who voted against a federal minimum wage hike and, allegedly, subsequently received death threats.

“That is woke supremacy. It is the ‘tolerant’ left’s intolerance for dissent. It is a progressive conception of diversity that does not include diversity of thought. It is discrimination falsely marketed as inclusion,” Scott wrote in a March 23 op-ed for The Washington Post, in which he detailed several times how “the woke folk” have come after him for comments that ran against prevailing liberal narratives.

“I’ve been called a member of the ‘coon squad’ for sharing my story and conservative vision for America at the 2020 Republican convention. A former leader of the NAACP called me a ventriloquist puppet. I’ve been called an Uncle Tom and a [racial epithet], among thousands of other insults.”

Saying that he’s “proud to be both a Black man and a Republican,” Scott mentioned his support for initiatives such as securing permanent funding for historically black colleges and universities, fighting for school choice “because poor, and often minority, parents are consistently the ones without choice,” and helping formulate the “Republican tax reform that lowered taxes for single moms, doubled the child tax credit and brought Black unemployment to historic lows.”

He said he’s faced unjustified criticism as a Republican, and argued that members of the “woke” movement will just as viciously attack Democrats who espouse views they don’t support.

“After a recent vote against her fellow Democrats’ attempt to pass a job-killing minimum-wage hike during the pandemic, my friend and colleague Sen. Kyrsten Sinema (D-Ariz.) received so many death threats that she had to increase security for herself and her partner,” Scott wrote, adding that he, too, has faced death threats.

“A man—a ‘woke’ Black man—is to be sentenced this month for threatening to gut me ‘like a fish’ and blow me away with his rifle,” Scott wrote.

Sinema was one of seven Democrat senators who voted against Sen. Bernie Sanders’s (I-Vt.) procedural vote on a $15 federal minimum wage hike, which was subsequently left out of the recent pandemic relief bill.

Sinema, widely considered one of the most conservative Democrats in the Senate, drew fire from progressives for her vote against the minimum wage hike, with several media outlets running critical op-eds.

“Eight Democrats joined Republicans in opposing the measure, but Sinema’s defection—curtsying on the Senate floor and offering an exaggerated thumbs-down—struck a particularly sour note,” wrote Aida Chavez in an opinion piece for The Nation titled “How Kyrsten Sinema Sold Out,” and labeling the Arizona lawmaker “the Senate’s newest super villain.”

“The display went viral, frustrating progressives and activists, who accused her of being all too eager to preserve poverty wages for millions,” Chavez wrote.

While numerous studies have been done over the years in support of both positions, a new working paper from the National Bureau of Economic Research, a nonprofit research organization, reviewed the entire set of published papers that look at the impact of minimum wage hikes on employment in the United States since 1992. In the paper, economists David Neumark and Peter Shirley conclude that the overwhelming majority of papers (79.3 percent) found that minimum wage hikes had a negative impact on employment.

In a recent interview with NTD News’ “The Nation Speaks,” a Nebraska small-business owner and an expert with the Heritage Foundation, a conservative think tank, argued that a $15 federal minimum wage would have a major impact on many of the country’s small businesses, including forcing them to cut hours, replace human labor with automation, hitting them with a range of hidden costs, and pushing some into bankruptcy.

Sinema has proposed raising the minimum wage to $11 an hour and indexing it at a rate above inflation until it reaches $15.

Scott’s recent op-ed isn’t the first time he has denounced woke culture, telling Fox News in an interview in early March, “Woke supremacy is as bad as white supremacy,” a comment for which he faced criticism, including in a Washington Post op-ed, in which a columnist called him a “fool” for his remarks.

Defending his “woke supremacy” comment, Scott argued in the op-ed that “woke culture is speeding our country toward ideological and literal segregation,” but he expressed hope that the movement’s chief advocates would put on the brakes.

“We can continue down the path of toxic woke mandates and virtue signaling that themselves create discrimination, segregation, and hate, or we can choose to create equality of opportunity and access to the American Dream for everyone,” he wrote.