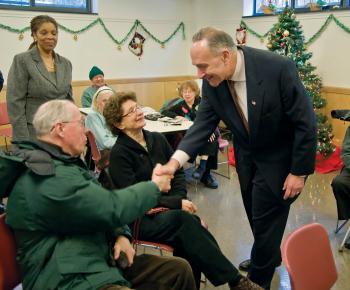 Late last year, Congress approved $5.1 billion for the Low Income Home Energy Assistance Program (LIHEAP), the highest funding level since the program’s establishment. This subsidy includes over $590 million in LIHEAP emergency funding to be used in extreme and unexpected conditions, such as more people in need or colder temperatures than predicted.

Due to the recession and the recent bitter cold that has swept across New York City, Schumer asked Obama to release these resources as soon as possible in order to ensure all those in need can receive home-heating aid.

“For so long, LIHEAP has been an essential safety net for low-income families and seniors in need of heating assistance, and this year is no different,” said Schumer in a press release. “In these tough economic times, the program is more important than ever. Families should not have to decide between necessities and heating their homes.”

According to the National Energy Assistance Directors Association (NEADA), more families are in need of and receiving LIHEAP benefits than ever before. States assisted more than 8 million households last year, nearly a one-third increase from fiscal year 2008.

NEADA anticipates a 20 percent increase in LIHEAP applications in 2010. Yet even at the record appropriation levels passed by Congress during the last two years, demand for the LIHEAP program continues to exceed funding. Thereafter, states will be able to spend contingency funding to cope with needs.

Less burdened by energy bills, low-income families and seniors will have more to spend on other essentials without having to choose between paying energy bills and putting food on their dinner table, said Schumer.

The Low-Income Home Energy Assistance Act of 1981 instructed that the LIHEAP contingency fund be used to assist the “needs of one or more States arising from a natural disaster or other emergency,” a scenario Schumer believes describes New York at the moment.

Helena Zhu
Follow
More articles from this author
5 Herbal Teas for Good Health
sharecomments
Renowned Korean Actor: SY ‘Should be something that everyone should experience’
sharecomments
Timbuktu and 9 Other Threatened UNESCO Heritage Sites
sharecomments