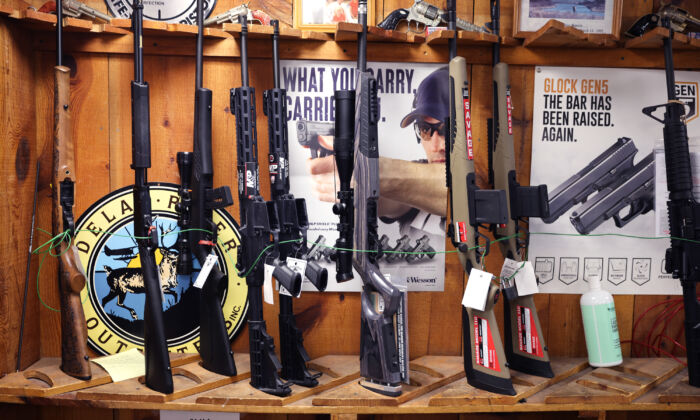 Sen. Chuck Schumer (D-N.Y.) demanded in a recent press conference that the Biden administration must stop the spread of “ghost guns” as New York City faces increased seizures of the homemade weapons.

The Senate majority leader addressed the issue during an Oct. 2 press conference, according to a report from The New York Post.

“There is absolutely no doubt about it—ghost guns continue to haunt New York, and pose a serious threat to our public safety,” Schumer said during the press conference.

“We’re asking the administration to act: Close the ghost gun loophole as quickly as we can,” he added. “Stop ghost guns from coming into our city, our communities that are killing [people], particularly our kids.”

Schumer also explained that since ghost guns are sold as individual parts, no background check is required to purchase one. The loophole could allow the weapons to be built or purchased illegally.

“You can buy a kit that puts all the pieces together,” the senator said. “It’s like Legos, but more dangerous.”

The Justice Department released a proposed rule in May that would broaden the definition of a firearm, requiring some gun-making kits to include a serial number, according to a report by The Associated Press.

White House officials have taken a fresh look at how to approach the issue of ghost guns. There has not been a decision made regarding whether the Justice Department would classify ghost guns as firearms, but it could create legislation to stop criminals from buying the parts necessary to construct such weapons, a New York Times report noted.

The ghost gun proposal served as one part of the Biden administration’s “steps to reduce gun violence,” according to President Joe Biden. He made the announcement on Twitter in April alongside efforts to regulate stabilizing braces on pistols, add state “red flag” laws, and support community violence interventions.

My Administration is taking initial steps to reduce gun violence, including:

Baltimore-based gunshop and gun policy advocacy group The Machine Gun Nest (TMGN) has warned against the legislation. The policy group warned that additional regulation of firearms would increase the demand for criminals to print 3D weapons.

“Nowadays, all someone needs is a 3D printer off Amazon, a few spindles of pla filament, and a CAD file to print a weapon at home. There’s simply no way for the government to continue a regulation spree on the industry and for any successful outcomes to materialize. It’s a losing war, just like the war on drugs,” TMGN said, according to a Zero Hedge report.

“What will the Feds ban next? 3D Printers?” it added.

The Justice Department estimated that more than 23,000 unregistered firearms were recovered by police between 2016-2000. More than 320 homicides or attempted homicides were associated with the weapon.

Ghost gun statistics are difficult to obtain. A New Mexico man allegedly sold four ghost guns to an undercover agent last month, according to the Bureau of Alcohol, Tobacco, Firearms and Explosives.