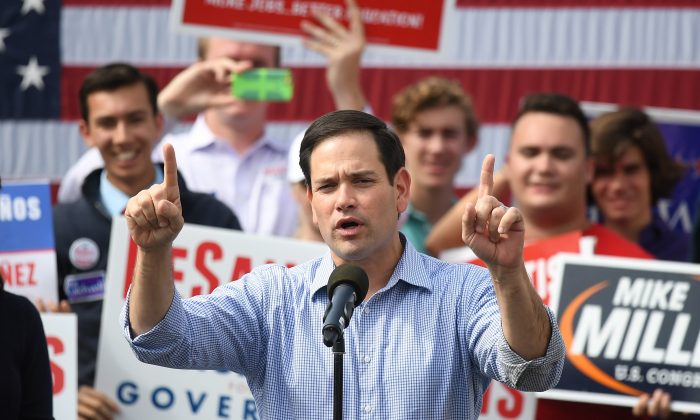 Sen. Marco Rubio (R-Fla.) has raised concern about two Florida counties that are still counting votes two days after the Nov. 6 election. One of the counties, he pointed out, has a record of election-law violations.

“Florida law requires counties report early voting [and] vote-by-mail within 30 minutes after polls close. 43 hours after polls closed, 2 Democrat strongholds #BrowardCounty [and] #PalmBeachCounty are still counting & refusing to disclose how many ballots they have left to count,” Rubio said in a Nov. 8 tweet.

Republicans won closely contested gubernatorial and Senate races in Florida, based on the ballots counted so far. But the two counties are still updating their results.

Broward Elections Supervisor Brenda Snipes “isn’t reporting hourly or regularly, but rather releasing thousands of additional votes, often in the overnight hours, that are chipping away at GOP leads,” Rubio said in a tweet.

“Now democrat lawyers are descending on #Florida. They have been very clear they aren’t here to make sure every vote is counted,” he said in another one. “They are here to change the results of election [and] #Broward is where they plan to do it.”

Caught On Video: Concerned citizen sees ballots being transported in private vehicles & transferred to rented truck on Election night. This violates all chain of custody requirements for paper ballots. Were the ballots destroyed & replaced by set of fake ballots? Investigate now! pic.twitter.com/GUPZnz7Gny

Broward County Elections Department has been caught repeatedly breaking the law and was successfully sued for it.

In 2016, Republican poll watchers found out that the Department’s staff was opening absentee ballots in private, which is illegal, because the process must be open to citizens who want to check the ballots are properly cast.

A judge ordered that Snipes change the way the process is handled so the violation wouldn’t happen again.

Also in 2016, Broward posted early voting results a half hour before polls closed, which is against the law.

In May, a judge found that Snipes illegally destroyed ballots from the 2016 congressional primary between Rep. Debbie Wasserman Schultz and then-Democratic rival Tim Canova. Canova sued and the judge agreed the ballots were destroyed prematurely.

After the August primaries, Broward was the last county in the state to post results.

“We have consistently been the bottom of the barrel getting our voting results in,” Broward County Commissioner Nan Rich said in September, the Miami Herald reported. “I don’t want to be 67th in 67 counties again in voting.”

“The new system should allow for results to be sent in more quickly than ever before, since they electronically transfer results,” the Herald stated.

Now, two days after the polls have closed, the county is still counting.

“Broward election supervisors ongoing violation of #Florida law requiring timely reporting isn’t just annoying incompetence,” Rubio said in a tweet. “It has opened the door for lawyers to come here [and] try to steal a seat in the U.S. Senate [and] Florida Cabinet.”

So far, in the gubernatorial race, Democrat Andrew Gillum lost with 49.2 percent of the vote to Republican Ron DeSantis with 49.6 percent—a margin of 39,600 votes.

In the Senate race, Democratic incumbent Bill Nelson lost with 49.9 percent of the vote against current Florida Gov. Rick Scott with 50.1 percent. Scott won by about 17,400 votes.

Both results are close enough to trigger recounts under Florida law.

“I firmly believe that at the end of this process Senator Nelson is going to prevail,” he said, Talking Points Memo reported.

Gillum at first conceded the race, but then released a statement saying he may be interested in a recount too.

Florida GOP chair Blaise Ingoglia said the results would end up the same regardless of recounts.

“The margin may change by a couple thousand, but it’s not going to change the outcome of the election,” he told CNN on Nov. 8.