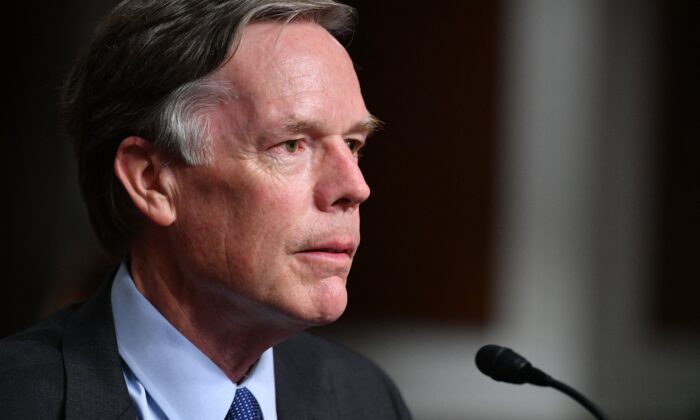 Nicholas Burns testifies before the Senate Foreign Relations Committee confirmation hearing on his nomination to be ambassador to China, on Capitol Hill in Washington, DC, on Oct. 20, 2021. (Mandel Ngan/AFP via Getty Images)
US-China Relations

“Nicholas Burns has a long career in public service, but it is a career defined by the failure to understand the threat posed by the Chinese Communist Party,” Rubio said of the procedural move in a statement.

Rubio, vice chairman of the Senate Select Committee on Intelligence and a senior member of the Senate Committee on Foreign Relations, said that Burns has “displayed no remorse or concern” about his current business relationships with “nationless corporations” operating in China.

“Burns is exactly the type of nominee I expect from President Biden given this administration’s weak approach toward China, including lobbying against my bipartisan Uyghur Forced Labor Prevention Act.”

Rubio added, “The last thing we need is another caretaker of American decline in the room with the Chinese Communist Party.”

It comes weeks after Sen. Ted Cruz (R-Texas), who has placed a hold on more than two dozen of the president’s picks, reportedly signaled that he does not intend to block Burns’ confirmation, according to Bloomberg.

Burns at his Senate confirmation hearing last month called China the “most dangerous competitor” to the United States and said the Chinese regime’s “genocide in Xinjiang,” abuses in Tibet, its “smothering” of Hong Kong’s autonomy and freedoms, and “bullying of Taiwan” must stop.

He also said China’s military threat to Taiwan was growing, but that maintaining the One China policy was the smartest and most effective way to deter China from exercising force over the self-ruled democratic island.

“This is a policy that can succeed if we execute it consistently and with some strength,” Burns told the Senate Foreign Relations Committee, adding that the most important deterrent was for the United States to maintain its military standing in the Indo-Pacific.

Still, he said Congress and the executive branch had every right to “expand our arms provisions to Taiwan.”

The Epoch Times has contacted Burns and the Biden administration for comment.

Rubio’s hold on Burns also comes one day after Biden and Chinese leader Xi Jinping engaged in talks in their first virtual summit as heads of state. Both leaders did not reach any “breakthrough” on issues concerning both nations in the three-hour talks.