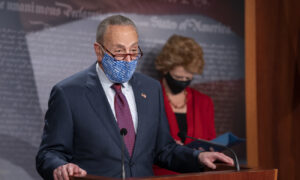 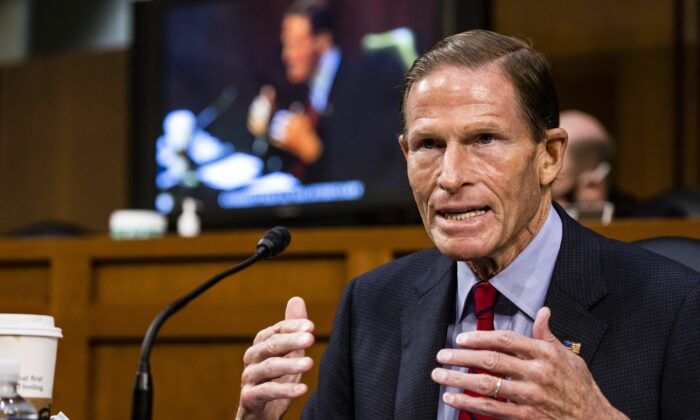 Hours before Amy Coney Barrett was sworn in as an associate justice of the Supreme Court during a White House ceremony, Sen. Richard Blumenthal (D-Conn.) took to the Senate floor warning of “consequences” if Republicans were to move ahead with her confirmation.

In a speech that lasted over 40-minutes, Blumenthal—who has joined other Democrats in openly opposing Barrett’s nomination before the Nov. 3 election—vocalized concerns over topics including abortion and health care.

He also touched on Democrats’ calls for Barrett to recuse herself from any cases involving the outcome of the presidential election or the Affordable Care Act (ACA) if confirmed by the Senate, due to concerns over conflicts of interest.

The due process clauses of the Constitution require judges to recuse themselves when the judge has a financial interest in the case outcome, and when there is a strong possibility that the judge’s decision will be biased, according to Cornell Law School.

Under federal law, however, an individual justice has the right to decide whether a conflict of interest or genuine question of bias exists. There is no way to force Barrett to recuse herself from any cases.

Barrett was nominated last month by President Donald Trump after Associate Justice Ruth Bader Ginsburg’s death. In a 52-48 vote, largely along party lines, Barrett was sworn in Monday night as the 115th associate justice on the Supreme Court and the fifth woman to serve on the bench.

Hours earlier, Blumenthal suggested that if Republicans succeed in seating Barrett on the highest court in the United States, Senate Democrats could potentially retaliate.

Blumenthal warned that the balance of the Supreme could “radically” shift for “decades” upon her confirmation, and expressed concern over how Barrett, who has a conservative-leaning voting record, would rule on a number of issues.

“Nothing less than everything is at stake,” he said in his remarks. “A shift in the balance of the court that will last for decades if we do not correct it—and believe me, there are appropriate measures that should be considered.”

The Epoch Times contacted Blumenthal’s office for comment but didn’t immediately hear back.

Democrats have long argued that whoever wins the election should be given the opportunity to select the nominee to replace the late Associate Justice Ginsburg who died on Sept. 18.

“This rushed, sham process is a disservice to our committee,” Blumenthal said earlier this month. “She has been rushed in way that is historically unprecedented.”

“The purpose of doing it is simply to have a justice on the Supreme Court, as the president has said, to decide the election and to strike down the Affordable Care Act,” he added.

Barrett said last month that she won’t pledge to step aside from cases related to the 2020 election amid pressure from Democrats because she could not identify any potential conflicts for her ruling on those cases.

She said that she would recuse herself from cases in which she had participated in as a judge on the 7th Circuit Court due to potential bias.

Barrett was sworn in by Justice Clarence Thomas, who administered the constitutional oath at a White House ceremony hosted by Trump.

“This is a momentous day for America, for the United States Constitution, and for the fair and impartial rule of law,” Trump said at the South Lawn ceremony, which was held with social distancing measures. “Over the past few weeks, the entire world has seen Justice Barrett’s deep knowledge, tremendous poise, and towering intellect.”