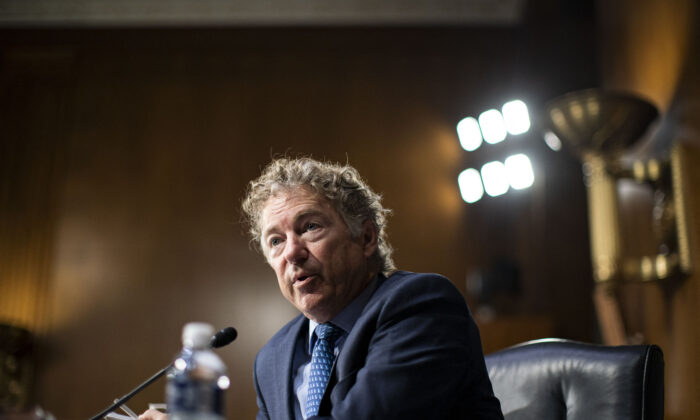 He warns, “We’re going to get more inflation, so this isn’t over.”
By Naveen Athrappully

Sen. Rand Paul (R-Ky.) is blaming the Biden administration for triggering a rise in inflation and warns that more price increases are on the horizon.

We are losing “more to inflation” than what the government handed out in the form of free money, Paul said in an interview with Newsmax while responding to a NerdWallet study on how inflation affected household spending. “The inflation came from the free checks that were passed out. They shut the economy down. They sent free checks to everyone. And they said, oh, this will make up for it. But guess what? When people add up how much they’re paying for gas and the grocery store, it’s canceled out all the free money,” he said.

Paul believes more inflation is coming as roughly $2 trillion of the government money tied up in cities, counties, and state governments has yet to be spent. As this money gets into the economy, it’s going to push up prices of goods higher, he warned. “We’re going to get more inflation, so this isn’t over.”

The 12-month U.S. Consumer Price Index (CPI), a measure of inflation, has remained at or above 7.5 percent for every single month this year. Since Joe Biden became president in January 2021, the CPI has risen from 1.4 percent to 8.3 percent in August 2022.

Average monthly spending during this period is estimated to climb by $961, with groceries rising by $101, gasoline by $209, shelter by $120, and household utilities by $70.

Despite inflation causing hardship to Americans, President Biden continues to downplay the situation. In a recent interview with CBS’s “60 Minutes,” Biden said that the inflation rate month to month was “just … an inch, hardly at all.”

“We’re in a position where, for the last several months, it hasn’t spiked. It has just barely … it’s been basically even,” Biden said.

Come winter, Americans will be facing the pain of higher heating costs. A forecast by the nonprofit National Energy Assistance Directors Association estimated that an average U.S. household will pay roughly 17 percent more this winter than last year to heat their home, hitting a 10-year high.

“Of even greater concern, the total cost of home heating would increase from $127.9 billion to an estimated $149.9 billion,” the forecast states. “The additional costs will fall hardest on lower-income households.”