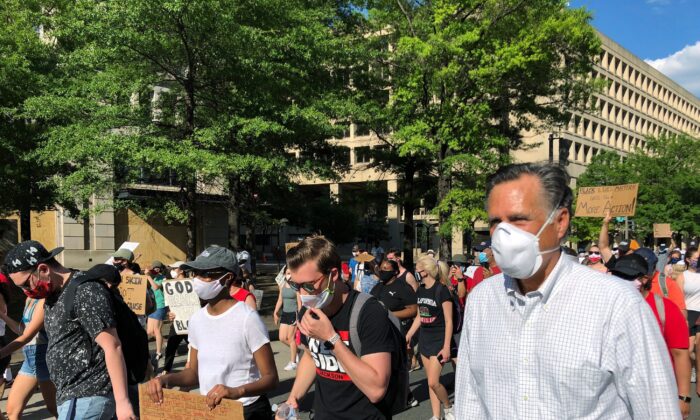 Sen. Mitt Romney (R-Utah) joined protesters in the nation’s capitol on Sunday in a march meant to highlight what organizers say is a pattern of racially-motivated actions by police officers against black people.

Romney, 73, who was painted as a racist by opponents when he ran for president in 2012, told a Washington Post reporter that he went to the protest “to make sure that people understand that black lives matter.”

The senator, a Mormon, was with a group of nearly 1,000 Christians.

At another point, Romney told an NBC reporter about being at the protest: “We need a voice against racism, we need many voices against racism and against brutality. And we need to stand up and say black lives matter.”

Protests and riots erupted across the nation following the death of George Floyd, a black man, in Minneapolis, Minnesota, late last month. Floyd, accused of forgery, died while in police custody after an officer knelt on the man’s neck for close to 9 minutes.

Protesters claim the justice system is fundamentally racist and want to cut funding to police departments and abolish prisons. Romney wasn’t asked whether he supported some of the more extreme demands. The senator’s office didn’t immediately respond to a request for comment.

Romney took to Twitter to post two pictures, one a selfie showing him in the foreground and protesters behind him, and another taken by someone else showing the senator, wearing a mask and checkered, light-colored dress shirt, walking amidst the protesters.

In another post over the weekend, Romney shared a picture of his father, George Romney, marching for civil rights in Michigan during the 1960s.

“Force alone will not eliminate riots,” the elder Romney was quoted as saying. “We must eliminate the problems from which they stem.”

Other lawmakers have visited with or marched with protesters, including Sens. Kamala Harris (D-Calif.) and Elizabeth Warren (D-Mass.).