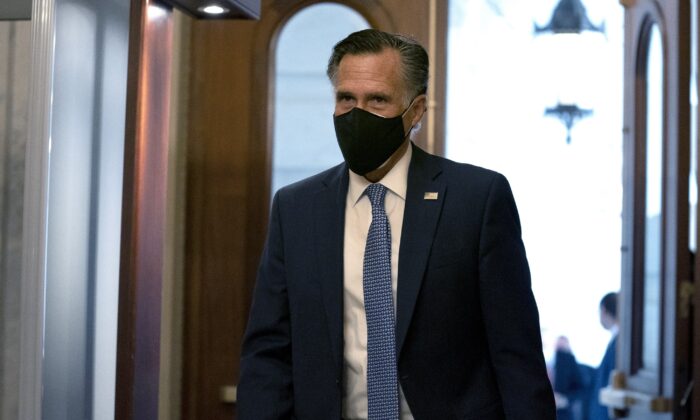 SALT LAKE CITY—Sen. Mitt Romney (R-Utah) tested positive for COVID-19 on Friday and “will be isolating and working remotely for the recommended period of time,” according to a news release from his office.

The Utah Republican is fully vaccinated and boosted against COVID-19 and is not showing any symptoms, the statement said. His wife, Ann, tested negative for the virus.

Romney, who was the GOP nominee for president in 2012 and the former governor of Massachusetts, is among a group of other congressional lawmakers that have contracted the virus recently, including Rep. Alexandria Ocasio-Cortez (D-N.Y.), Rep. Ayanna Pressley (D-Mass.), and Sen. Elizabeth Warren (D-Mass.).

Earlier this month, Romney criticized President Joe Biden’s administration for what he saw as a failure to ramp up testing availability ahead of the Omicron variant, according to the Deseret News.

“I think, unfortunately, the administration was wrong in not building testing capacity at a time when we all thought COVID was going away,” he said at a Senate hearing.

In the same hearing, Romney said it would be helpful for people to know when they should get tested for the coronavirus, noting the lack of available test kits.

“Because I think a lot of individuals, myself included, get tested when there’s no indication that I need to get tested, other than to just want to make sure I’m not sick. There’s huge demand for tests which are in short supply, in part because of that,” he said.

Omicron symptoms are often milder, and some infected people show none, researchers agree. But like the flu, it can be deadly, especially for people who are older or have other health problems.