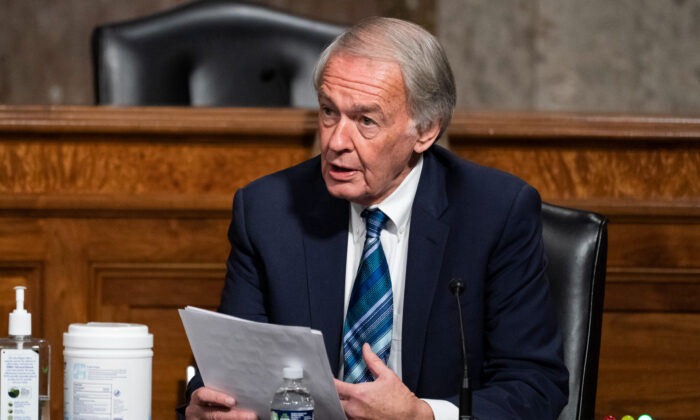 Sen. Ed Markey (D-Mass.) has called for the Biden administration to guarantee that it won’t engage in a first-use nuclear strike against Russia amid the escalating war in Ukraine, although officials have indicated that the United States will likely maintain its policy of “strategic ambiguity.”

Markey called on the administration to announce a no-first-use (NFU) policy on May 12 during a Senate Foreign Relations Committee hearing. His statements come two days after Director of National Intelligence Avril Haines warned that Russian President Vladimir Putin could use nuclear weapons if he feels like he’s losing the war.

“We’re supporting Ukraine, but also we don’t want to ultimately end up in World War III, and we don’t want to end up in a situation where actors are using nuclear weapons,” Haines told the Senate Armed Services Committee on May 10. “We perceive that as something that [Putin] is unlikely to do unless there is effectively an existential threat to his regime and to Russia from his perspective.

“We do think that that could be the case in the event he perceives that he is losing the war in Ukraine and that NATO is sort of, in effect, either intervening or about to intervene in that context, which would obviously contribute to a perception that he is about to lose the war in Ukraine.

Expressing concern about rising nuclear tensions, Markey said on May 12 that the Biden administration should make a diplomatic gesture by declaring an NFU policy.

“Doesn’t it make sense for the U.S. to say flat out that we will not be the country that engages in a first use of nuclear weapons in Ukraine, so the whole world knows and Russia knows as well?” Markey asked Karen Donfried, the U.S. assistant secretary of state for European and Eurasian affairs.

While Donfried replied that it’s U.S. policy to stay out of the armed conflict in Ukraine, that answer didn’t satisfy the Democrat from Massachusetts.

“I think that, increasingly, people in our country and around the world are worried that this could escalate and that nuclear weapons could become involved,” Markey said. “So, from my perspective, I think it would be wise for our country to say flat out, ‘We will not use nuclear weapons if nuclear weapons have not been used against Ukraine or the United States.’”

Donfried nodded but didn’t say anything in response to Markey’s suggestion.

“I would also hope that, at least on the side, conversations could be engaged in with regard to nuclear weapons deployment between U.S. and Russia,” Markey said. “I know it’s difficult in this context, but have you thought about that?”

“I want to be clear that the U.S. is not a party to this conflict,” Donfried responded. “It was Russia that invaded its neighbor.”

Sen. Jim Risch (R-Idaho), the ranking Republican member of the committee, also responded to Markey, speaking against his proposal.

“This talk of nuclear weapons is something that needs to be undertaken very cautiously. It is not the policy of the United States at this time to declare a no-first-use of nuclear weapons. We have what’s called ‘strategic ambiguity’ in that regard,” he said. “Our allies have joined with us in that particular policy.”

Risch said that while he shares Markey’s concerns about nuclear war, that issue is out of the Senate’s control.

“Unfortunately, it’s not us that have control over irrational conduct,” he said, referencing Putin’s nuclear threats.

However, intelligence experts have warned that the Biden administration has contributed to rising nuclear tensions through actions such as calling for regime change in Russia and not pushing harder for a ceasefire agreement.

Veteran Intelligence Professionals for Sanity (VIPS), a group of former intelligence officials headed by retired CIA analyst Ray McGovern, said in a May 1 open letter that Moscow sees U.S. military involvement in Ukraine as akin to the Soviet Union’s attempt to put nuclear missiles in Cuba.

“Ukraine is now a must-win for Putin,” the memo says. “We cannot rule out the possibility that, backed into a corner, he might authorize a limited nuclear strike with modern missiles that fly many times the speed of sound.”