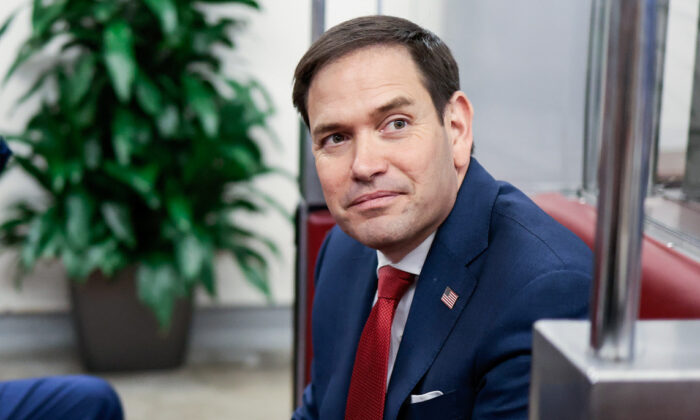 Sen. Marco Rubio: US Reliance on Chinese-Made Pharmaceuticals and Critical Technology Could Help Hand Taiwan to the Regime

“What everybody needs to understand,” Sen. Marco Rubio (R-Fla.) said, “is that the day China takes Taiwan without the U.S. being able to stop them will be a linchpin moment in human history.”

In a recent episode of “American Thought Leaders,” host Jan Jekielek sat down with Rubio to discuss how the Chinese regime has been systematically co-opting our elites for decades and leveraging the American system against us—from our innovations to our laws to our free markets.

Jan Jekielek: As the vice chairman of the Senate Intelligence Committee, you recently chaired a hearing about the Chinese Communist Party’s (CCP’s) plans for economic and technological dominance. What are the most important findings of this hearing?

Sen. Marco Rubio: The purpose of these hearings is to shine a public light on something that a lot of people are unaware of: that there are all sorts of technologies and industries critical to the direction of the 21st century. They’re developing very fast, whether it’s quantum computing or artificial intelligence. Whichever nation or nations have the high ground and are dominant in those fields will benefit geopolitically, militarily, and economically across the board.

America needs to be competitive in those fields, and we face an adversary in China that is investing heavily in them, but is also stealing the advances we’re making.

The fear is that we’ll find ourselves in a world where China has established technical dominance in a number of critical fields. There’s no American alive today that has ever lived in a world in which America has been in second place in global technology. The world looks very different when your country isn’t the world leader in technology, and an adversary is.

It’s important for us to understand that if we think we’re going to “free market” our way through this, that’s not going to work, because China isn’t playing by free market rules. They are playing by mercantilist rules where their companies get to cheat and steal, but ours do not. They expect us to live up to the rules, but they also expect us to allow them to continue to violate them.

Mr. Jekielek: You’ve said, “Public policy toward China has been held hostage by left radicalism on one side or a lack of corporate patriotism.”

Sen. Rubio: Let’s say you’re an American company headquartered in the United States, but you view yourself as a global company. Your job is to make as much money as you can this next quarter so your shareholders will be happy and your board will give you a new contract. It doesn’t matter if the way you’re doing it is bad for America. That’s what a lot of companies have decided to do.

Mr. Jekielek: What about the left-wing radicalism you mentioned?

Sen. Rubio: These are the American corporations that decide they’re going to boycott the state of Georgia over an election law or boycott Florida over what kids are being taught in the classroom. But they have no problem doing business in China—where there are no human rights, where people are jailed without trial, and where Uyghur Muslims are put into work camps.

Mr. Jekielek: How do you view the strategic threat of China versus Russia?

Sen. Rubio: They’re not comparable. There’s no doubt Russia has strategic and tactical nuclear weapons. They also have some conventional capabilities, although clearly not as many as they had two months ago, when they suffered atrocious losses at the hands of the Ukrainians.

China is on a completely different scale. China is a technological, commercial, biomedical, geopolitical, military, and industrial competitor. I think on a scale of 1 to 10, China is a 10 and Russia is a 3. And the Chinese are watching Russia and the Ukraine very carefully.

What happens when you invade a neighboring country? How does the world respond? What leverage do they have on us, and what leverage do we have in return? They’re taking notes and learning lessons from this invasion of Ukraine for their future aspirations, both in the South China Sea and in places like Taiwan.

Mr. Jekielek: What leverage do they have on us?

Sen. Rubio: Our supply chains are disrupted because of a pandemic. Imagine if they decide to deny us the same things—not because of a pandemic, but because they want to threaten us. Ninety percent of the most important antibiotics we rely on in this country are made in China. Seventy-something percent of the elements involved in batteries, lithium, and the like are from China. And 80-something percent of our generic pharmaceuticals are made in China.

They have the ability to disrupt our economy right now, because we depend way too much on them for both basic raw materials and the finished production of goods. And I don’t think we’ll finish this decade without something happening with Taiwan. So, just imagine we’re getting to that point, and China says to America, “If you get involved with Taiwan, we are going to cut you off from these things.”

Mr. Jekielek: Are you suggesting that within this decade, you expect the Chinese regime to take action on Taiwan?

And once Taiwan makes that decision, then they have no choice but to cut the best deal they can with the Chinese government. I think that is Plan A for China. That’s what they would prefer to see happen.

Plan B is to take Taiwan by force—a rapid military engagement that allows them to secure [Taiwan] before there can be any foreign engagement, be it from the United States or our allies in the region.

Mr. Jekielek: This has incredible implications globally. I don’t know if all of our viewers are aware that Taiwan is the production hub for the most technologically advanced chips made for all sorts of important devices, including military devices.

But what everybody needs to understand is that the day China takes Taiwan without the U.S. being able to stop them will be a linchpin moment in human history. That will be the moment when the world will conclude that the United States and the West are no longer the most powerful countries in the world. The whole world order will change to a China-centric world order at that moment. We’re hoping that day will never come.

Mr. Jekielek: I want to pivot to human rights. You’ve been involved in the issue of Chinese human rights for a long time.

Sen. Rubio: They want to become the world’s most powerful country. If the world’s most powerful country is willing to do these sorts of atrocities to its own people, imagine what they would do to you or the people around the world. So, first and foremost, you have to understand who these people are, and the best way to understand them is to see how they treat their own people.

You don’t put people into death camps. You don’t have slave labor to help your industries. If the most powerful country in the world thinks those things are acceptable, that is going to influence what happens around the world.

Mr. Jekielek: I recently had Nury Turkel [vice chair of the U.S. Commission on International Religious Freedom] on the show, talking about the Uyghur genocide and the genesis of it. He said that nothing was done when credible reports were coming out about organ harvesting from Falun Gong practitioners. Now it’s happening to the Uyghurs as well.

Sen. Rubio: I think the Chinese have calibrated the world’s reaction to everything—from their intrusions in the South China Sea to these atrocious practices. They believe that society is too busy around the world to care too much about these things and [people] aren’t going to walk away from the benefits they gain by having a relationship with China.

So they’ve learned how to play this game.

Mr. Jekielek: What are the key things that America and other nations must do to counter the CCP threat?

Sen. Rubio: We need to identify the critical industries for national security in the 21st century. We must have either an American or an allied capability to produce those things. If it comes from China, we should assume it will be weaponized against us in the future. I think that is by far the most important thing.

We should also ramp up our military capabilities to be able to defend against what China is developing, including investments in space defense.