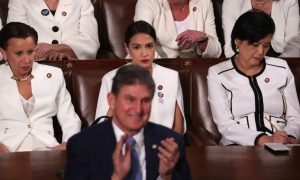 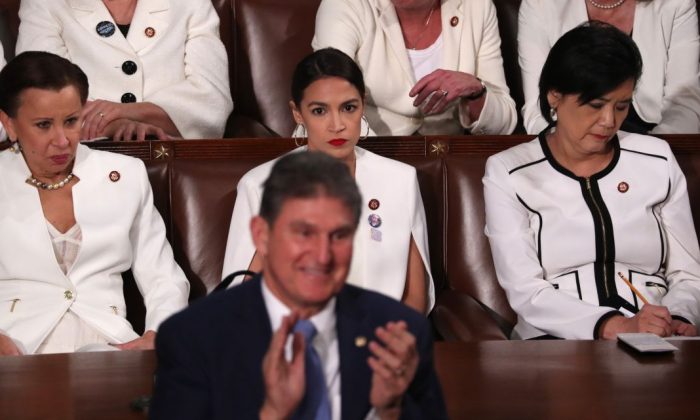 Democratic women of the House of Representatives, including Rep. Alexandria Ocasio-Cortez (D-N.Y.) (C), remain seated as Senator Joe Manchin (D-W. Va.) stands and applauds in front of them during President Donald Trump’s State of the Union address in Washington on Feb. 5, 2019. (Jonathan Ernst/Reuters)
Trump Administration

Sen. Manchin Doesn’t Regret Being Only Democrat Who Stood During Trump’s Call to Stop Late-Term Abortions

Sen. Joe Manchin (D-W. Va.) said that he doesn’t regret being the only Democrat who stood and clapped when President Donald Trump strongly condemned late-term abortion and infanticide during his State of the Union speech.

Pictures of Rep. Alexandria Ocasio-Cortez (D-N.Y.) glaring at Manchin from behind as the West Virginian stood, smiling and clapping, went viral, highlighting a growing divide between old-school liberals like Manchin and freshly elected Democrats like the young Ocasio-Cortez who have increasingly tried to move the party to the far-left.

In the latest effort, Virginia Democrats tried to pass a bill that would have allowed abortions up until birth if just one doctor said going through with the birth would harm the prospective mother’s mental or physical health.

Following up on the bill’s debate, Virginia Gov. Ralph Northam described a hypothetical situation in which a mother gave birth but the woman and the doctor may choose to end the baby’s life, comments which left many shocked and prompted someone to leak pictures from Northam’s medical college yearbook showing two men dressed in blackface and KKK gear, igniting a scandal in the state.

During his State of the Union address, President Donald Trump said, “Lawmakers in New York cheered with delight upon the passage of legislation that would allow a baby to be ripped from the mother’s womb moments before birth.”

“These are living, feeling, beautiful babies who will never get the chance to share their love and dreams with the world,” the president added. “And then, we had the case of the Governor of Virginia where he basically stated he would execute a baby after birth.”

Trump said he is now going to ask Congress “to pass legislation to prohibit the late-term abortion of children who can feel pain in the mother’s womb.”

During that portion of the speech, Manchin stood and applauded along with the entire Republican side of the aisle.

When asked why he did so, Manchin responded: “Late-term abortions are just horrific…totally just wrong.”

In the following days, Manchin faced criticism from within his party, noting that it was the most controversial topic that Trump touched on that he stood up and applauded and that he could “feel the daggers” from fellow Democrats when he did so.

“Late-term abortions, my goodness. It would have to be a dire medical situation,” he told the Washington Examiner in an interview published on Feb. 10, nearly a week after the speech. He said the Virginia bill Northam proposed, and a recent bill passed in New York that was championed by Gov. Andrew Cuomo, is “just totally unconscionable to me.”

“My goodness. Well, I could hear the boos a little bit, you know, I didn’t know if the boos were for the president or for me standing, I wasn’t sure,” he added. “But I could sure feel the daggers.”

A Queens man accused of stabbing his pregnant girlfriend to death had an additional criminal charge dropped because of a new law that was recently signed by the governor of New York.

Hobson was initially charged with second-degree abortion since Irigoyen was pregnant, but the Queens District Attorney’s office told the New York Post that it had to drop the charge because of the new law.

Part of the law, known as the Reproductive Health Act, removes abortion from the state’s criminal code and modifies the definition of homicide to no longer include the unborn.

Cuomo and other Democrats celebrated the law after signing it in late January. Among other things, the law allows a mother to have an abortion if a doctor believes there is an absence of fetal vitality, the pregnancy is under 24 weeks, or endangers the woman’s health.