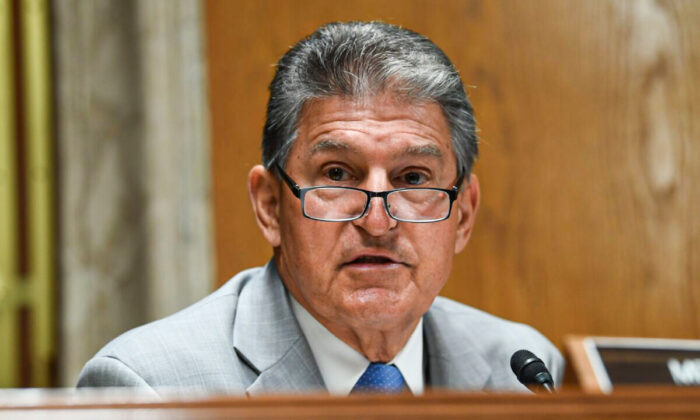 Sen. Joe Manchin (D-W.Va.), a crucial swing-vote in the Senate, said that he would support legislation raising the minimum age to purchase semiautomatic weapons to 21 and said he has never had the need for weapons like the AR-15.

Manchin’s support comes as various factions of Democrats in both the House and Senate push for sweeping federal legislation to change gun laws in the United States in the wake of a school shooting in Uvalde, Texas, that left 19 children and two adults dead.

In the House, where simple majorities rule, Democrats have pushed for the wide-reaching “Protecting Our Kids” Act, which was pushed through the House Judiciary Committee in a party-line vote last week. It is expected to come to the floor for a vote later this week.

That bill, among other provisions, would ban the sale of “any semiautomatic centerfire rifle or semi-automatic centerfire shotgun that has, or has the capacity to accept, an ammunition feeding device with a capacity exceeding 5 rounds” to citizens below the age of 21; currently one only needs to be 18 to buy such a weapon.

It would also codify the Department of Justice’s controversial ban on bump stocks, a weapon modification that increases the fire rate of a semiautomatic firearm.

In addition, it would also make it a federal crime to possess weapons that critics have pejoratively labeled “ghost guns,” usually describing homemade or 3D-printed weapons without a serial number.

However, the real litmus test for any bill is in the Senate, where all legislation must overcome a 60-vote filibuster threshold to pass.

In the evenly-divided Senate, most gun control bills are by default doomed to failure due to GOP objections in favor of proposals that respect Second Amendment rights.

Still, closed-door negotiations between Sens. Chris Murphy (D-Conn.) and John Cornyn (R-Texas) are ongoing, and Democrats are hopeful that some deal can be reached to overcome the 60-vote threshold.

Manchin, whose support is needed for almost any Democrat-led proposal, said on Monday that he would support increasing the age limit to buy semiautomatic weapons from 18 to 21 and said he would potentially support a ban on AR-15s.

“I never thought I had a need for that type of a high-capacity automatic weapon,” Manchin told reporters. “I like to shoot, I like to go out and hunt. I like to go out sports shooting. I do all of that. But I’ve never felt I needed something of that magnitude.”

Manchin added that he “wouldn’t have a problem on looking at” backing a ban on so-called “assault weapons,” a controversial term often loosely-applied by gun control proponents to military-style semiautomatic rifles. However, such a bill has practically no chance of passing the 60-vote filibuster threshold.

“It depends on what they, how they would approach it,” Manchin said. “I’m open to anything that makes gun sense.”

In the past, Manchin—one of the only Democrats hailing from GOP-dominated West Virginia—was among a faction of Democrats who expressed some discomfort with David Chipman, President Joe Biden’s first controversial pick to head the Bureau of Alcohol, Tobacco, and Firearms.

Eventually, skepticism from Manchin and other members of the Democrats’ Senate caucus forced Biden to withdraw Chipman’s nomination.

Manchin’s comments on Monday suggest a strong sense of unity among Democrats that legislative action is needed.

Republicans have unified equally behind backing legislation to address mental illness issues and enhance school security, but have been hesitant to back any efforts to further restrict gun rights.

Ultimately, however, any legislative action will need the backing of at least 10 Republicans, greatly limiting the scope of any possible compromise bill.