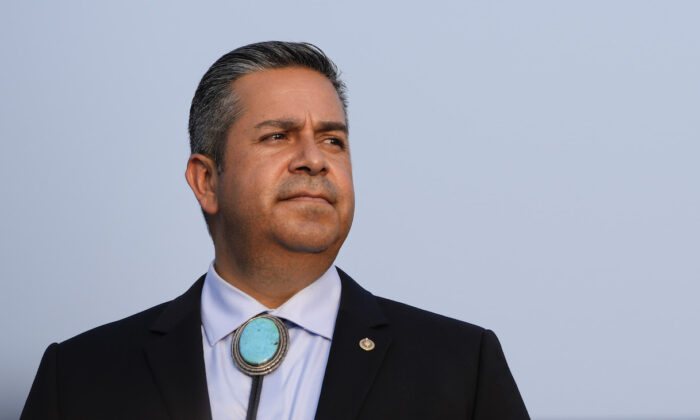 Sen. Ben Ray Lujan (D-N.M.) says that he’ll return to the Senate in order to vote on President Joe Biden’s yet-unannounced Supreme Court (SCOTUS) pick after the 49-year-old Democrat suffered a stroke that put Democrats’ narrow 51-50 hold on the Senate in danger.

After he undergoes rehabilitation, Lujan said, “I will be back on the floor of the United States Senate in just a few short weeks to vote on important legislation and to consider a Supreme Court nominee. Now, rest assured, New Mexicans can know they will have a voice and a vote during this process. That has never changed.”

At the end of January, Justice Stephen Breyer announced that he would be retiring from SCOTUS after almost two decades on the court panel.

Breyer, now approaching his mid-80s, has faced substantial pressure from liberals and Democrats to retire while a Democrat occupied the Oval Office, spurred by fears that liberals could lose another seat on the 6-3 conservative-leaning court.

Prior to President Donald Trump’s 2016 victory, SCOTUS was evenly-split, with four Republican-appointed justices and four Democrat-appointed justices, with one seat left vacant in the aftermath of Antonin Scalia’s death. After Trump’s term ended, SCOTUS had six GOP appointees to only three Democrat appointees.

In this setting, Democrats want to appoint the next justice while in the White House. However, Sen. Lujan’s unexpected stroke threw Democrats’ ambitions into doubt.

In the Senate, Democrats hold a paper-thin one vote majority with the assistance of Vice President Kamala Harris’s tie-breaking vote. But since the VP can only cast this vote in the event of a tie, Lujan’s absence could have denied Democrats the 50-vote threshold, and thus denied confirmation to Biden’s nominee.

Lujan’s recovery and announcement that he will soon be able to return for the brewing SCOTUS battle is a welcome relief for Democrats, who have already had to change the legislative schedule to accommodate the loss of Lujan’s vote.

Following Breyer’s announcement that he was retiring, Biden announced that he would stand by a promise made during the 2020 presidential campaign to nominate a black woman to the position. However, there have yet to be any developments as to who the nominee may be.

Republicans and conservatives were quick to criticize Biden’s promise, which critics say places a higher value on the nominee’s skin color and sex than on their qualifications to serve on the nation’s highest court.

Sen. Josh Hawley (R-Mo.) said that Democrats should “expect a major battle” if Biden nominates a “woke activist” to the Supreme Court. Similarly, Senate Majority Leader Mitch McConnell (R-Ky.) has warned Biden not to “outsource” his SCOTUS pick to “the radical left.”

“The American people elected a Senate that is evenly split at 50–50,” McConnell said in a statement following Biden’s announcement that he would nominate a black woman. “To the degree that President Biden received a mandate, it was to govern from the middle, steward our institutions, and unite America.”

Under Trump, Democrats—still upset over Republicans’ decision not to consider Obama nominee Merrick Garland for SCOTUS—refused to allow Republicans to meet the 60-vote threshold to end debate on Neil Gorsuch’s confirmation. Republicans, with few other options available, used the so-called “nuclear option” to change Senate rules in order to allow SCOTUS confirmation votes to be practically filibuster-proof, setting the threshold to end debate at 51 votes.

While the move allowed Republicans to advance nominations that would have been impossible to get through the Senate otherwise, it means that Republicans now have few tools at their disposal to stop a pick from Biden that the GOP considers too radical.

With Lujan’s announcement that he will be able to return for a vote in the near-future, Democrats will be secure in their majority, assuming that all 50 Democratic members are behind Biden’s SCOTUS pick.

While Manchin said during an interview at the end of January that his beliefs wouldn’t necessarily “prohibit [him] from supporting” a nominee who was more liberal than him, he also refused to commit to voting for anyone who Biden nominates.

During the confirmation vote for Neil Gorsuch, Manchin was one of only four Democrats who voted for cloture on debate before the GOP rule change. Following the rules change, Manchin voted to confirm Gorsuch.

The West Virginia maverick was also the only Democrat to vote for Brett Kavanaugh’s confirmation, after the nominee was accused of allegedly raping a California professor in the 1980s. Though the accuser could present no evidence beyond testimony, most Democrats took the accusation as entirely true and refused to vote for Kavanaugh on those grounds.

Now that Lujan appears to be on the road to recovery, Manchin’s swing-voting tendencies are likely Republicans’ only shot at preventing too radical a nominee from replacing Breyer if Biden chooses this path. Lujan’s recovery leaves Democrats with a much better chance of securing their nomination than they would have had without Lujan’s vote.