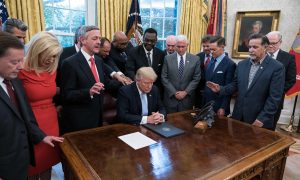 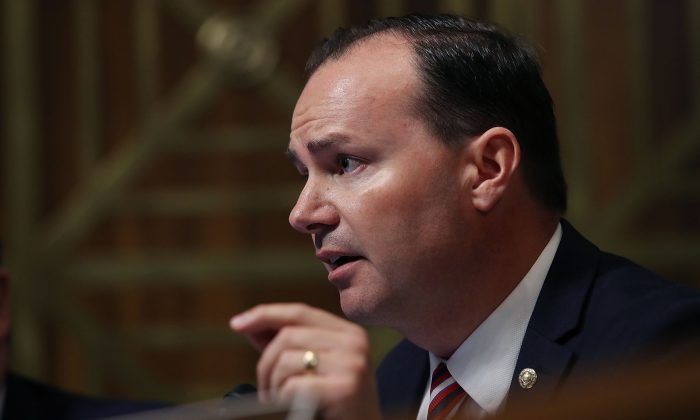 WASHINGTON—It’s difficult to imagine how the authors of the Constitution could have been more clear on an issue than they were with Article VI, Clause 3, which declares “no religious Test shall ever be required as a Qualification to any Office or public Trust under the United States.”

Even so, Senate Democrats are—with increasing frequency—asking detailed questions about the religious views of President Donald Trump’s judicial and executive branch nominees, then citing their answers to oppose confirming them.

For Republicans like Sen. Mike Lee (R-Utah), the Democrats are clearly and unconstitutionally applying a religious test.

“No nominee should be picked or rejected based on his or her faith. Period,” Lee told The Epoch Times. “As long as I’m in the Senate, I will never question someone about the content of their religious faith.”

Sen. Dianne Feinstein (D-Calif.), the committee’s ranking minority member, asked Barrett: “Why is it so many of us on this side have this very uncomfortable feeling that, you know, dogma and law are two different things … and I think in your case, professor, when you read your speeches, the conclusion one draws is that the dogma lives loudly within you.”

Feinstein’s question came despite Barrett’s previous declaration that “it is never, ever permissible for [judges] to follow their personal convictions in the decisions of the case rather than what the law requires.”

All nine Democrats on the panel voted against Barrett’s confirmation, while all 11 Republicans voted for the nominee.

She was subsequently confirmed by the full Senate on a 55–43 vote, with only three Democrats supporting Barrett.

The questions have become more detailed and intense in the months following Barrett’s hearing, most notably including:

Growing tensions surrounding the Democrats’ tactic culminated earlier this month during a Feb. 7 judiciary committee exchange between Lee and Hirono that left the Utah senator miffed.

“In what way, shape, or form is asking Naomi Rao whether she believes particular conduct to be sinful an appropriate question to be asked by this committee?” Lee asked Hirono.

“I urge you to consider the fact that we should never expose someone to shame, ridicule, or scorn on the basis of their religious beliefs, and I ask that we refrain from doing so in this committee,” Lee said.

“We should never again ask someone what they regard as a sin or other particulars of their religious beliefs. It’s nobody’s darn business. It’s certainly not the business of this committee.”

Hirono denied Lee’s contention, arguing that it is appropriate to ask if a nominee’s “strongly held religious views” makes them unable to serve in an unbiased manner in a public office.

“It is not that we ask do you think that such and such is a sin,” Hirono claimed.

“That was asked this week, this week it was asked. I’m not making this up,” a clearly exasperated Lee declared.

Asked by The Epoch Times if it would amount to a religious litmus test to reject a presidential nominee of the Muslim faith who believes local authorities should enforce Sharia law, Lee said such a comparison “doesn’t really work.”

It is fair to ask if “someone can enforce or interpret the law irrespective of their faith,” but “that’s not what the Democrats have been doing,” Lee said.

“Asking about the content of someone’s beliefs is not the same as asking whether they can honor his or her oath. I understand that the Democrats say they’re interested in whether a judicial nominee will be biased, but you don’t need to ask about a nominee’s view of sin in order to accomplish that aim,” he said.

The issue raised by the Democrats’ actions, however, may not be as simple and straightforward as the wording of the Constitution, according to Walter Olson of the libertarian Cato Institute.

“It pains me to ever disagree with Sen. Mike Lee on a constitutional question because he’s one of my favorite senators, and he tends to be right more often than any of his colleagues in the Senate,” Olson told The Epoch Times.

“The religious test clause of the Constitution has almost no applicability any more because it takes in a very narrow kind of government action,” Olson said.

Olson is the founding editor of the overlawyered.com blog and author of multiple books on the U.S. legal system.

The authors of the Constitution feared the kinds of religious tests for public office under the king that had been common in England for several centuries, Olson said. That’s the reason for Article VI, Clause 3.

“What it has never done is prevent the consideration of religion, it’s not an anti-discrimination clause,” Olson said. Presidents throughout American history have considered religion in making appointments, such as for maintaining a certain balance on the Supreme Court or in a chief executive’s cabinet, he added.

For that reason, according to Olson, “a member of Congress, who for good reasons or bad reasons or indifferent reasons, decides to make religion a weighting factor in confirming a judicial appointment or any other appointment is not violating the Constitution.”

“Where I am strongly with Lee and critical of Harris, Cory Booker, and the others is that America has worked as a religiously very diverse society because … we have a superstructure of self-restraint.

“We may disagree with each other’s religious beliefs but especially in conducting public business, we act diplomatically, we smile, and accept the view that the other guy’s views are just as good as ours, even if we don’t really think it is.”

Olson said the Democratic senators “just make me want to get up and say, ‘Don’t you realize what you’re losing, of having this conversation politely with people of seriously different views?’ ”