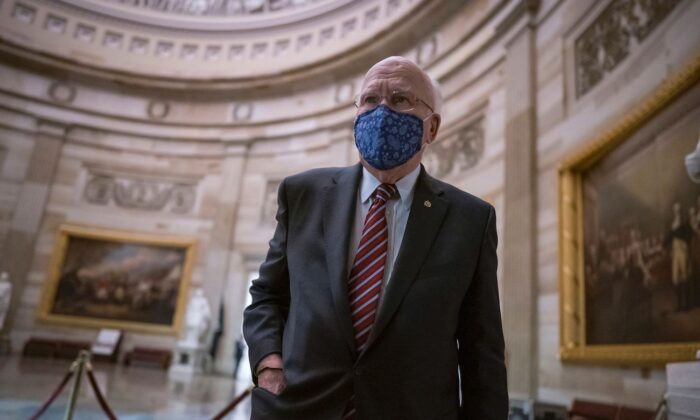 Sen. Patrick Leahy (D-Vt.) the president pro tempore of the Senate, pauses in the Rotunda of the Capitol awaiting the article of impeachment against former President Donald Trump, in Washington, on Jan. 25, 2021. (J. Scott Applewhite/POOL/AFP via Getty Images)
Impeachment Trial

Sen. Leahy Returns Home After Being Examined at Hospital for Feeling Unwell

Sen. Patrick Leahy (D-Vt.), who is presiding over the second impeachment trial of former President Donald Trump, returned home after being evaluated at the hospital on Tuesday.

“This evening, Senator Leahy was in his Capitol office and was not feeling well. He was examined in the Capitol by the Attending Physician,” Leahy’s spokesperson, David Carle, said in a statement to news outlets.

“Out of an abundance of caution, the Attending Physician recommended that he be taken to a local hospital for observation, where he is now, and where he is being evaluated.”

He returned home later that night after a thorough examination and receiving test results, according to reports.

The nature of his condition was not known, nor the hospital to which Leahy was taken.

The move to the hospital came just hours after he presided over the start of the Senate impeachment trial of Trump, by swearing in his fellow lawmakers. The actual trial will begin in February. Leahy will also serve as a juror in the trial.

Leahy, 80, is the Senate president pro tempore, a largely ceremonial designation traditionally given to the longest-serving member of the majority party. Leahy was first elected in 1974. The role effectively serves as a backup for the president of the Senate.

“The Constitution says the chief justice presides for a sitting president. So it was up to John Roberts whether he wanted to preside with a president who is no longer sitting, Trump, and he doesn’t want to do it,” Schumer said during an appearance on MSNBC. “So traditionally what has happened is then the next in line is the Senate pro tem. That’s the most senior senator on the majority side, and that’s Sen. Leahy, who’s a very experienced man, and a very fair man.”

“I consider holding the office of the president pro tempore and the responsibilities that come with it to be one of the highest honors and most serious responsibilities of my career.  When I preside over the impeachment trial of former President Donald Trump, I will not waver from my constitutional and sworn obligations to administer the trial with fairness, in accordance with the Constitution and the laws.”

No president in U.S. history has ever been convicted. A conviction would require a two-thirds majority vote. Democrats hold 50 seats in the Senate and Republicans also hold 50.

The Senate late Tuesday voted 55–45 to table an order proposed by Sen. Rand Paul (R-Ky.) challenging the constitutionality of former President Donald Trump’s impeachment trial, with 45 Republican senators saying it would be unconstitutional to impeach a former president. Five Republicans joined Democrats. Paul said after the vote that the impeachment is “dead on arrival.”

“If you voted that it was unconstitutional, how in the world would you ever vote to convict somebody for this?” he told reporters, adding, “This vote indicates it’s over. The trial is all over.”