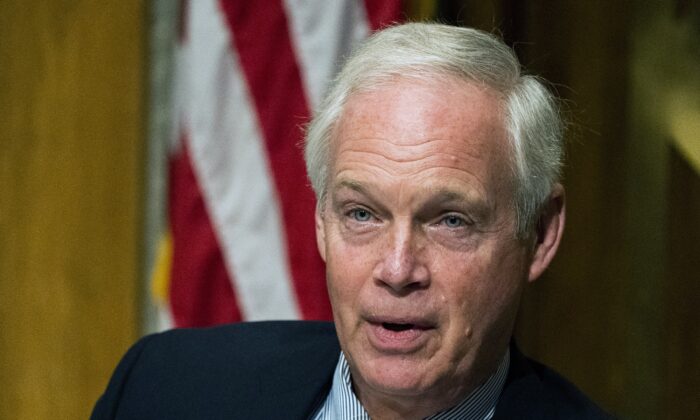 Sen. Johnson: McConnell’s Scathing Comments on Trump Do Not ‘Reflect the Majority of Our Conference’

Sen. Ron Johnson (R-Wis.) said on Monday that Senate Minority Leader Mitch McConnell’s “scathing” comments about former President Donald Trump do not represent the viewpoint of the majority of the GOP.

“You got Leader McConnell, voting not guilty, not to convict, but then just providing a scathing speech on the floor of the Senate,” Johnson told radio host Jay Weber. “That does not reflect the majority of our conference.”

Johnson added that while McConnell (R-Ky.) has the right to express his opinion, “he has to realize [that] as our leader, what he says reflects on us.”

Despite voting to acquit the former President last Saturday, McConnell delivered a lengthy speech criticizing Trump, saying he was “practically and morally responsible for provoking the events of the day.”

“No question about it,” McConnell said. “The people that stormed this building believed they were acting on the wishes and instructions of their president.”

“He didn’t get away with anything, yet,” McConnell added, suggesting that Trump could still face litigation for allegedly inciting a mob that broke into the Capitol—a charge over which Democrats impeached Trump. The former president has since been acquitted by the Senate. “We have a criminal justice system in this country. We have civil litigation. And former presidents are not immune from being accountable by either one.”

Johnson indicated that he agrees more with Sen. Lindsey Graham (R-S.C.) on the impeachment of Trump.

“What happened on 6 January was terrible for the country. But [Trump is] not singularly to blame,” Graham told Fox News on Sunday. “Democrats have sat on the sidelines and watched the country being burned down for a year and a half and not said a damn word, and most Republicans are tired of the hypocrisy.”

Johnson said that he disagrees with Democrats’ characterization of the Capitol breach as an “armed Insurrection,” adding that the trial was “just dripping with hypocrisy.”

“The group of people who have supported Trump, the hundreds of thousands of people that attend those Trump rallies, those are people that love this country. They never would have done what happened on January 6,” Johnson said. “That’s a group of people we need to unify and keep on our side.”

He said of Republicans who voted with the Democrats, “They think this is an opportunity to purge our movement of any connection to Trump again. They’re just wrong. Because if you take a vote, it’s gonna be 90 percent plus the Trump supporters versus those Lincoln Project grifters.”

The Lincoln Project is a political action committee run by current and former Republicans. The project endorsed Democrat Joe Biden for president and worked to prevent the reelection of Trump.

During the interview, Sen. Johnson also criticized House Speaker Nancy Pelosi (D-Calif.) for using the fence around the Capitol to paint “74 million Americans who voted for Donald Trump” as potential “domestic terrorists” and “insurrectionists.”

Janita Kan and Ivan Pentchoukov contributed to this report.