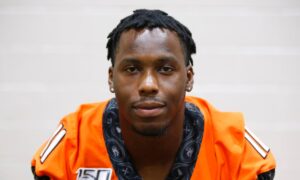 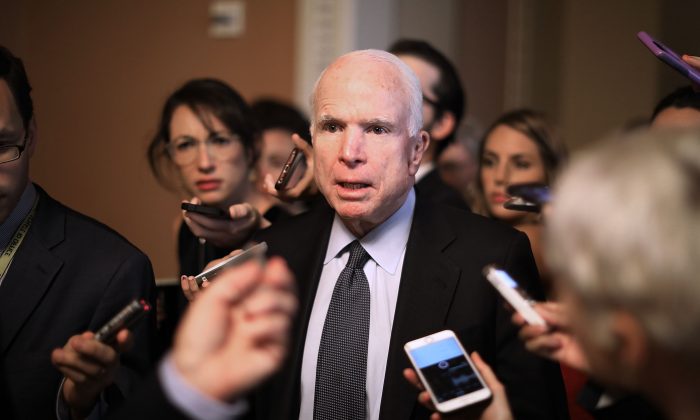 Arizona Sen. John McCain was hospitalized on Wednesday afternoon due to the side effects of his cancer treatment.

McCain, a Republican, was admitted to the Walter Reed Hospital for “normal side effects” of his treatments, his office said in a statement.

“As ever, he remains grateful to his physicians for their excellent care, and his friends and supporters for their encouragement and good wishes,” the statement said.

He’s receiving treatment for glioblastoma, an aggressive form of brain cancer, and he was diagnosed with the illness in July. “Sen. McCain looks forward to returning to work as soon as possible,” the statement continued.

After his diagnosis, the six-term senator returned to the U.S. Capitol after Labor Day and has maintained a regular senate work schedule as he continues treatment, according to AZCentral.

This week, McCain, 80, has not been able to vote in the Senate, and he didn’t attend a White House ceremony with President Donald Trump, NBC reported.

“I am more energetic, and more engaged, as a result of this because I know that I’ve got to do everything I can to serve this country while I can,” McCain said during a 60 Minutes interview in September.

In the interview, he described the cancer as “very, very serious.”

In the meantime, during his treatment, McCain also suffered an Achilles’ tendon tear, forcing him to wear a walking boot.

“Senator McCain was treated at Walter Reed Medical Center over the weekend for a minor tear in his right Achilles’ tendon, as well as for other normal and non-life-threatening side effects of cancer therapy,” McCain’s office said in a written statement at the time.

In November, however, McCain came under fire after he was seen with his walking boot was on a different foot.

He claimed to switch it to his left foot to “give it a break,” The Hill reported.

Y'all don't hear me. Why is John McCain's boot on another foot. Stop with that mirror crap. Wake up people. pic.twitter.com/A3NCjk1bnp

After the question was posed, his office gave an explanation on Twitter.

Thank you for your support & best wishes. My left leg was doing extra work to compensate for the boot, so I'm giving it a break. I still hate wearing this boot, but it won't slow us down from frying 7 turkeys today!