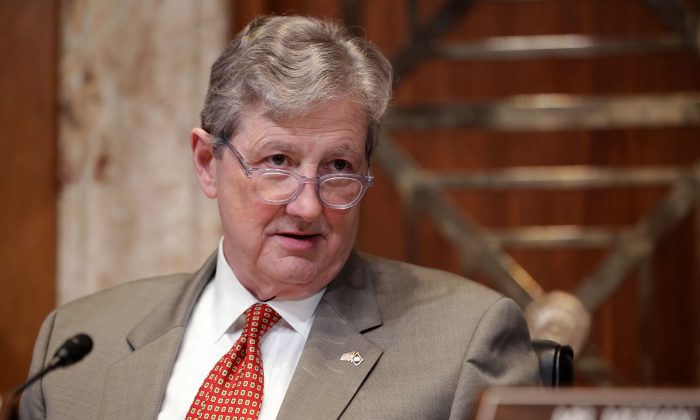 Kennedy, appearing on Fox News’ “Tucker Carlson Tonight” on July 16, said that President Donald Trump’s tweets about some Congresswomen going home to fix their countries was “a poor choice of words” but said he doesn’t believe Trump is a racist or that Trump’s original tweet was racist.

“What he has said now in clarification is: this is not China,” Kennedy said. “This is America, and in America, if you hate our country, you’re free to leave. Now he said that in response to the behavior of the four congresswomen that you are talking about, the so-called ‘squad.’”

“I’m not sure the president should exchange playground insults with them. When you try to argue with a fool that proves there’s two, but the president decided to do so,” Kennedy said.

“The simple fact of the matter is that the four congresswomen think that America was wicked in its origins,” he continued. “They think that America and its people are even more wicked now, that we are all racist and misogynistic, and evil. Now they’re entitled to their opinion, they’re Americans, but I’m entitled to my opinion, and I just think they’re left-wing cranks, and they’re the reason that there are directions on a shampoo bottle. I think we should ignore them,” he added.

Carlson asked about the possibility that there’s a market for the ideas the four are discussing, noting the Democratic party has embraced the congresswomen recently.

“There’s no question that the so-called squad has moved the Democratic Party substantially left,” Kennedy responded.

“They are destroying the Democratic Party. I’m appalled that so many of our presidential candidates are falling all over themselves to try to agree with the four horsewomen of the Apocalypse,” he later added. “They are entitled to their opinions, but I’m entitled to say that they are whack jobs.”

….they are destroying the Democrat Party. I’m appalled that so many of our Presidential candidates are falling all over themselves to try to agree with the four horsewomen of the apocalypse. I’m entitled to say that they’re Wack Jobs.” Louisiana Senator John Kennedy

Kennedy’s remarks came after the House of Representatives voted to condemn Trump’s missives, with a resolution calling them “racist tweets.”

The final vote was 240-187, with four Republicans and an independent joining Democrats in approving the resolution.

“I know racism when I see it,” said Rep. John Lewis of Georgia, whose skull was fractured at the 1965 ‘Bloody Sunday; civil rights march in Selma, Alabama, reported the Associated Press. “At the highest level of government, there’s no room for racism.”

The proceedings were delayed after House Speaker Nancy Pelosi (D-Calif.) was found in violation of a House rule when she disparaged Trump by House Majority Leader Steny Hoyer (D-Md.) after Rep. Emanuel Cleaver (D-Mo.) became upset and left the presiding officer’s chair.

Democrats later voted to keep Pelosi’s words on the record despite being in violation of the rule.

Trump praised Republicans for their unity, adding, “The Republican vote was 187-4. Wow! Also, this was the first time since 1984 that the Speaker of the House was ruled Out of Order and broke the Rules of the House. Quite a day!”