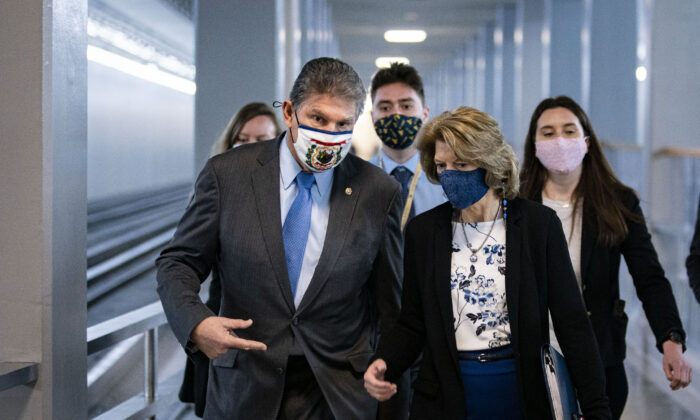 “Instead of rushing to spend trillions on new government programs and additional stimulus funding, Congress should hit a strategic pause on the budget-reconciliation legislation,” Manchin, considered by many to be the most conservative Democrat in the Senate, wrote in an op-ed for the Wall Street Journal. “A pause is warranted because it will provide more clarity on the trajectory of the pandemic, and it will allow us to determine whether inflation is transitory or not.”

He added: “While some have suggested this reconciliation legislation must be passed now, I believe that making budgetary decisions under artificial political deadlines never leads to good policy or sound decisions. I have always said if I can’t explain it, I can’t vote for it, and I can’t explain why my Democratic colleagues are rushing to spend $3.5 trillion.”

Manchin also wrote that he is opposed to the timetable established by top Democrats to try and pass the massive bill by reconciliation, which requires a simple majority to pass and bypasses the filibuster.

Elaborating further, the West Virginia lawmaker said he can’t agree to the plan “or anywhere near that level of additional spending” without conducting a careful assessment of the economy amid fears of inflation and higher prices for goods.

Manchin also reiterated his disapproval for some Democrats’ proposals to pay for that spending including previous White House-backed plans to increase corporate tax rates from 21 percent to 28 percent. A 25 percent corporate tax rate has been previously endorsed by the senator.

Sen. Kyrsten Sinema (D-Ariz.) also publicly stated that she opposes the $3.5 trillion spending level, and Republicans are also unified in their opposition to the package.

About a week ago, the Democrat-controlled House of Representatives met during an emergency session and approved the budget resolution, which is chiefly supported by Sen. Bernie Sanders (I-Vt.). All 212 Republicans voted against advancing the budget, while all 220 Democrats voted to advance it.

Addressing fears from Manchin and Republicans about increasing the national debt, House Budget Chair John Yarmuth (D-Ky.) said during a recent committee hearing that the federal government has the ability to spend as much as they need on the measure.

Despite the House passing the measure, Senate Democrats have just 51 votes including Vice President Kamala Harris’s tie-breaker, meaning they cannot afford to lose even a single defection to pass the budget bill.