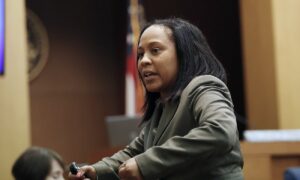 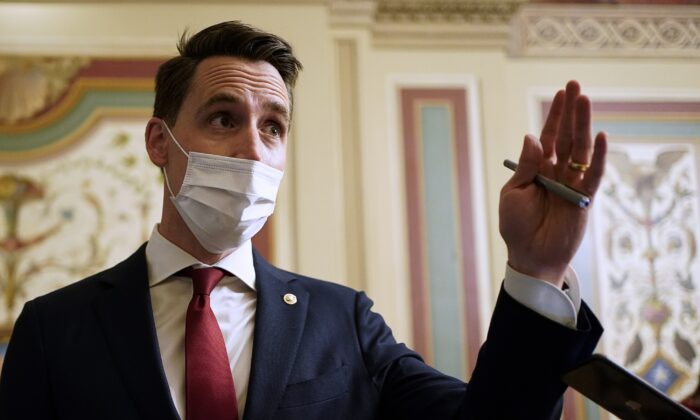 Sen. Josh Hawley (R-Mo.) speaks to reporters during a break in the impeachment trial of former President Donald Trump, at the U.S. Capitol in Washington on Feb. 10, 2021. (Joshua Roberts/Pool/Getty Images)
Impeachment Trial

Hawley was spotted in the gallery reading something.

“For me, it’s a little less claustrophobic,” he said. “So we’re not all jammed together.”

“Also, for me it’s a better viewpoint because I can look right at the impeachment managers and see them. When I’m sitting in the chamber, I kind of look at the back of their head, which I did for three weeks last year,” he added, referring to when the Senate held an impeachment trial against Trump last year before acquitting him.

Hawley, a first-term senator, said he was reading trial briefs and took notes during the proceedings.

Hawley has been one of the loudest critics of the trial, arguing it’s not necessary.

“It is a terrible, terrible waste of time in the midst of this pandemic,” Hawley told reporters earlier Wednesday.

He’s voted twice with most other Republicans to call the trial unconstitutional because Trump is no longer in office. Some have noted Supreme Court Chief Justice John Roberts isn’t presiding over the trial. His replacement, Sen. Patrick Leahy (D-Vt.), has indicated he will vote to convict Trump, giving the proceedings a partisan air.

“He’s proud to pull himself apart from everyone else and be the only guy. This is all political for him. It’s all political theater. That’s why he’s up there with his feet over the chair. He’s probably working on his book manuscript,” she said during an appearance on MSNBC, where she’s a contributor.

“It remains to be seen whether or not it hurts him politically in a state that voted for Trump by 15 points,” she added.

The trial is set to continue on Thursday.