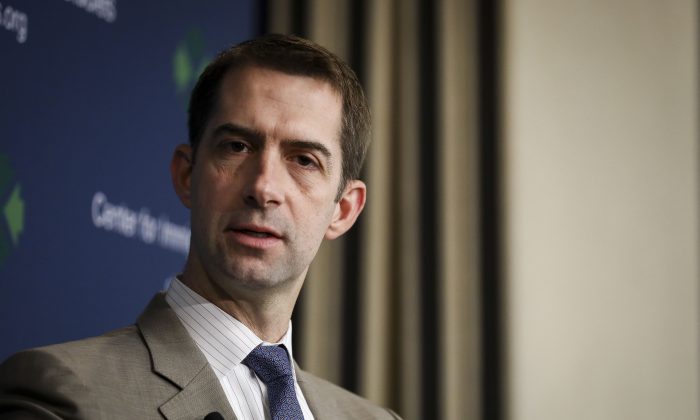 “We shouldn’t be naive about that threat. And we should always err on the side of national security as opposed to beneficence on behalf of foreign students,” Cotton said during an event hosted by the Center for Immigration Studies on July 30.

FBI Director Christopher Wray told senators at a congressional hearing on July 23 that the agency has more than 1,000 active investigations into theft of U.S. intellectual property, “almost all leading back to China.”

Cotton, along with five other Republican senators, introduced a bill in May to revoke F and J visas to individuals who are employed, funded, or otherwise sponsored by the Chinese People’s Liberation Army. The bill, S. 1451, also suggests that the other “Five Eyes” countries—Australia, New Zealand, Canada, and the United Kingdom—take similar measures.

The F-1 student visa allows foreign nationals to study full time at an accredited institute, while F-2 visas are issued to their spouses and dependents.

The J-1 visa is for individuals approved to participate in work- and study-based exchange visitor programs. J-2 is for their spouses and dependents.

Both are nonimmigrant visas, meaning they are not pathways to citizenship.

More than 2,500 Chinese military scientists and engineers have studied abroad, often by masking their military ties, between 2007 and 2017, according to a report by the Australian Strategic Policy Institute (ASPI), a think tank partially funded by Australia’s Department of Defense.

The main destinations were the Five Eyes alliance countries, as well as Singapore, Germany, and Norway.

Cotton said more thorough background checks are required, as well as more scrutiny into the types of programs that should be made available to Chinese students.

“Chinese students at National Laboratory or affiliated institutes and Chinese students at major research universities studying in advanced scientific and engineering programs that do major contract work for the Department of Defense or the intelligence community—no,” Cotton said.

“If Chinese students want to come here and study the great books of the Western tradition so they can learn more about constitutional democracy and individual liberty, I can support that.”

Cotton also said too many American universities have become too reliant on money from Chinese students.

“Again, that’s part of China’s deliberate policy,” he said. “Even if you’re not an agent of the Chinese government, still sending Chinese students to places like MIT or Cal-Tech … to study artificial intelligence or quantum computing and just [returning] to China and working in Chinese industry, is much better for China than it is for the United States.”