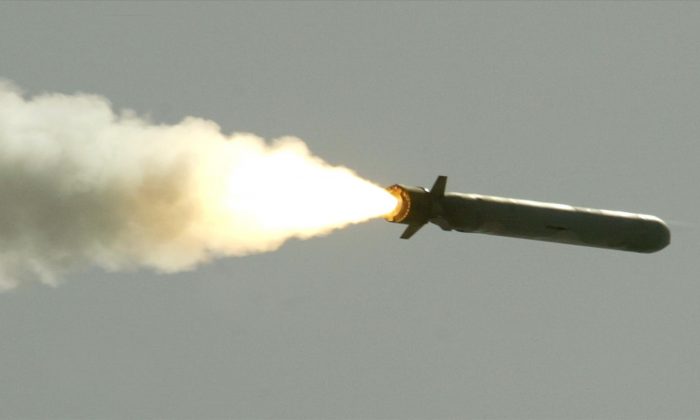 A Tomahawk cruise missile flies toward Iraq after being launched from the AEGIS guided missile cruiser USS San Jacinto in the Red Sea on March 25, 2003. (Mark Wilson/Getty Images)
US News

WASHINGTON—Sen. Tom Cotton (R-Ark.) gave a muscular speech sounding an alarm over the conventional balance of power in the Indo-Pacific region in the aftermath of the U.S.’s withdrawal from the Intermediate-Range Nuclear Forces (INF) Treaty with Russia, at the Heritage Foundation on March 13.

Cotton described an agreement that had represented a victory of U.S. diplomacy over the Soviet Union in the 1980s, but has since been violated by the Russians since 2008 and no longer serves U.S. interests, saying:

“Moscow long ago developed land-based, intermediate-range missiles that can strike all of Europe. And … China is of equal concern. Beijing has stockpiled thousands of missiles that can target our allies, our bases, our ships, and our citizens throughout the Pacific.

“Yet, we don’t have the weapons to match either threat, because for 10 years we’ve been the only nation on Earth that has constrained itself from producing medium-range, land-based missiles …

“[W]ithdrawing from this outdated treaty is only a first step. Now, we must rapidly develop the weapons necessary to overcome the strategic imbalance that’s emerged between us and our rivals, China and Russia.”

He cited current Army Chief of Staff Mark Milley in describing the United States as “outranged and outgunned” in the region and current South Korean ambassador and former Adm. Harry Harris, stating “we have no ground-based capability that can threaten China.” Detailing the extensive missile development that China’s People’s Liberation Army had undertaken while the United States was bound by INF, Cotton warned:

“If the conventional military balance continues to shift against us in the Indo-Pacific, the United States may find itself unable to credibly uphold its military commitments in the region. That’s why it’s imperative that we seize the opportunity provided by our imminent withdrawal from the INF and regain the upper hand over our rivals,” Cotton said.

He dismissed calls for remaining in the treaty, citing legislation sponsored by several liberal Democrat House members led by Ilhan Omar of Minnesota and Alexandria Ocasio-Cortez of New York, that would leave the United States unilaterally bound by the treaty: “Apparently, they’re fine with prohibiting the United States from building a weapon that literally every other nation on Earth can build.”

Similarly, he rejected further last-ditch efforts with Russia to preserve the treaty or bring China within its constraints. With 95 percent of China’s missile force captured by INF’s terms were it subject to it, Cotton called efforts at a three-party INF-like agreement “fantasy.”

Saying “now is the time to reclaim the strategic advantage in the Indo-Pacific,” Cotton outlined a plan that would have the United States deploy mobile land-based missiles with allies throughout the region, adding that it may have the benefit of growing U.S. alliances.

“None of China’s allies are blind to its ambitions, and no country of any consequence in the region prefers to be a vassal state to Beijing as opposed to an American military partner,” he said.

Following Cotton’s speech, Eric Sayers and Elbridge Colby, scholars from the Center for a New American Security, discussed prospects for deploying missile systems in the region.

Sayers explained that due to China’s geography, it “can threaten the limited number of air bases and naval platforms that the U.S. can deploy.”  This capability may lead China to conclude that it could win a “quick, sharp war,” and it’s the restrictions that INF has placed on the United States’ development and deployment of missiles that has largely led to this circumstance, he argued.  In response, he believed that the United States should adapt and deploy ground-launched cruise missiles in the region.

Echoing a point made by Cotton during his remarks, Colby doesn’t see a need for the United States to deploy “symmetrical” systems (essentially mirroring China’s level of forces and capability), but “what we do need to be able to do is basically defend against their ability to take over the territory of our allies and partners and hold it.”

Both believed that the immediate candidates for basing missile systems were Guam and Japan. In the case of Japan and other allies in the region, they believed that as China extends its missile and other military capabilities, opportunities for basing agreements would grow.

Addressing hypersonic missiles as a component of U.S. missile forces in Asia, Sayers saw their timeframe for possible deployment as at least 10 years away, which did not address the current threat.  Colby also pointed out that hypersonics were likely to be expensive, and that cruise missiles were a cheaper and versatile alternative.

Jeff Smith, a research fellow on South Asia at the Heritage Foundation and moderator of the discussion, addressed India’s role in any future missile deployments with “we are not yet at the point where we’re talking about basing much of anything in India,” but long-term, particularly in response to China’s rise, he sees strong prospects for India becoming a much closer U.S. strategic partner.