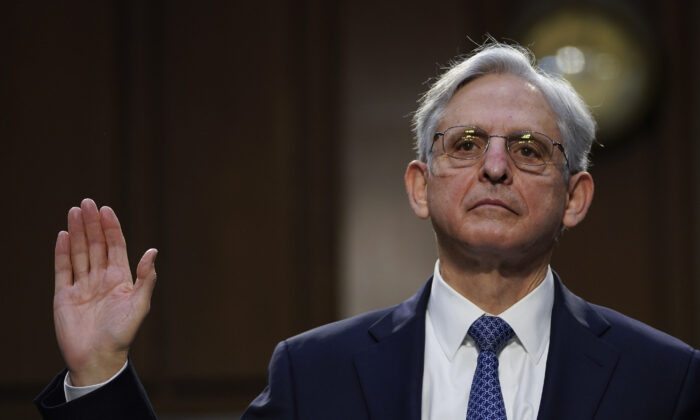 Sen. Tom Cotton (R-Ark.) said on March 3 that he’s blocking an effort by Senate Democrats to expedite Judge Merrick Garland’s confirmation vote to be attorney general over his answers to senators’ written questions.

Cotton’s objection presents the second delay that Garland has faced since being nominated by President Joe Biden to lead the Department of Justice. The Republican from Arkansas said Garland’s responses were inadequate because he had “refused to answer basic questions” on a range of issues such as immigration, guns, the death penalty, and law enforcement.

In one of the questions, senators had pressed Garland on whether he thought illegal entry at America’s borders should remain a crime, after he failed to give an adequate response during his confirmation hearing.

Garland responded: “As I said at the hearing, I haven’t thought about that question. The president has made clear that we are a country of borders and with a concern about national security. I don’t know of a proposal to decriminalize, but still, make it unlawful to enter. Since the hearing, I have not had time to think further about the question.”

Cotton noted that the judge had provided similarly evasive responses to several other important questions.

He then argued that the delay is necessary to ensure fairness, noting how Attorney General William Barr was received by Senate Democrats during his 2019 confirmation hearing. Democrats expressed strong opposition and attacked Barr during the process.

“Ensuring the … Senate has time to debate these issues and get answers is the same thing that Senate Democrats did for Bill Barr. We’re not going to have one standard for Trump’s nominees and another for Biden’s,” Cotton said.

It comes after Senate Judiciary Committee Chairman Dick Durbin (D-Ill.) revealed on the Senate floor earlier on March 3 that Garland’s confirmation was likely to be delayed due to “an objection to expediting his nomination.”

“As a consequence, we face the Senate procedure, which means it could be delays even into next week before he can take job,” Durbin said. “I sincerely hope that whoever is holding his nomination up on the other side can be persuaded to give him his chance.”

He told reporters later on March 3 that he didn’t know which senator had objected to the nomination.

The Senate Judiciary Committee advanced Garland’s nomination to the full Senate by a 15–7 vote on March 1. Democrats were joined by four Republicans to vote in favor of the judge, including Sens. Chuck Grassley (R-Iowa), Lindsey Graham (R-S.C.), John Cornyn (R-Texas), and Thom Tillis (R-N.C.).