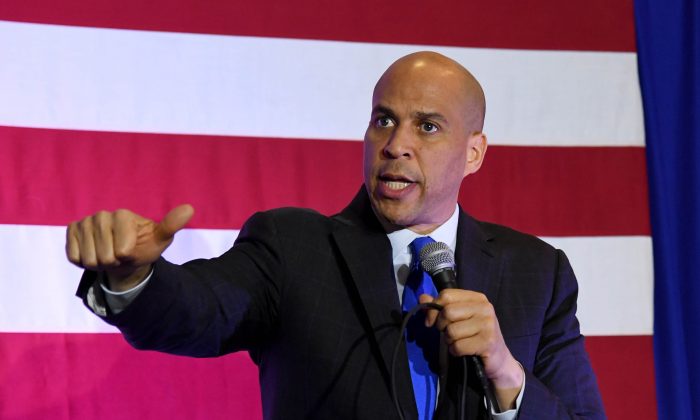 A day after he suspended his presidential campaign, Sen. Cory Booker (D-N.J.) said he is open taking a spot on the 2020 Democratic ticket as vice president but he demurred on endorsing anyone.

While speaking to CBS News’s “This Morning,” Booker said that while he is focused on New Jersey, his state, he is “not taking anything off the table” in regards to a possible vice presidential bid. However, Booker said he’s had no conversations about it so far.

“I definitely will consider it, 100 percent. Right now, I am going to take a breather,” Booker said of a potential endorsement. “I’m going to focus on the impeachment trials. And I have a reelection campaign.”

“I have had no conversations. I was so pleased that I got to go through the experience and be vetted … as one of Hillary Clinton’s final choices,” he said. “My focus is really on Jersey, and my state … and being with my senior senator, Bob Menendez [D-N.J.] … the best dynamic duo” in the Senate, Booker said.

The junior senator from New Jersey also called on the Democrats still in the race to “keep it to the issues” following a report from CNN that claimed 2020 hopefuls Sens. Elizabeth Warren (D-Mass.) and Bernie Sanders (I-Vt.) had a disagreement, where Sanders disagreed with the idea that Americans are ready for a female president.

“From Joe Biden all the way to Amy Klobuchar, these are really good human beings. You can’t put ourselves in a position where when we eventually have one nominee, people feel some kind of way that they don’t want to support that nominee,” Booker told CBS News in the same interview.

On Monday, Booker, who was also the former mayor of Newark, ended his campaign and noted he no longer has enough resources to keep going.

“It was a difficult decision to make, but I got in this race to win, and I’ve always said I wouldn’t continue if there was no longer a path to victory,” Booker said in a press release, adding that he was always willing to end his campaign if there was “no path forward” to obtaining the Democratic nomination.

“It’s with a full heart that I share this news—I’ve made the decision to suspend my campaign for president,” he added in the press release. “Our campaign has reached the point where we need more money to scale up and continue building a campaign that can win—money we don’t have, and money that is harder to raise because I won’t be on the next debate stage and because the urgent business of impeachment will rightly be keeping me in Washington.”

In recent months and weeks, Booker said his campaign had struggled with soliciting donations.

“Without a fundraising surge to close out this quarter, we do not see a legitimate long-term path forward,” campaign manager Addisu Demissie said in September.

According to RealClearPolitics aggregates of polls, his national average polling numbers have remained at around 2 percent. Booker also didn’t qualify for the December or January debates.