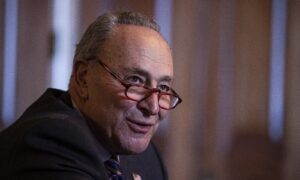 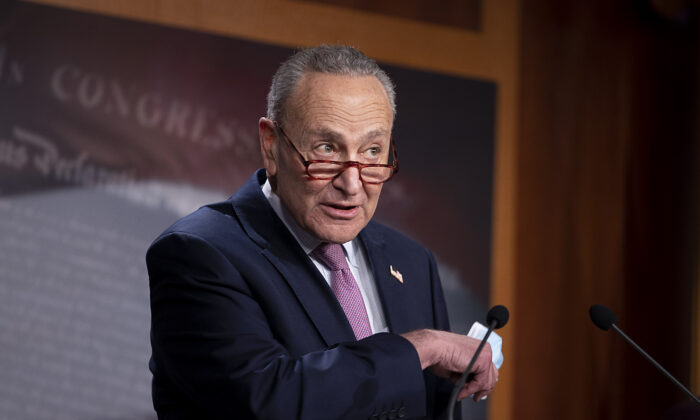 After Vice President Kamala Harris swore in Sens. Jon Ossoff (D-Ga.) and Rev. Raphael Warnock (D-Ga.), giving Democrats the majority in the Senate, it means that Sen. Chuck Schumer (D-N.Y.) is now the majority leader of the Senate.

“As majority leader, President-elect Biden and Vice President-elect Harris will have a partner who is ready, willing and able to help achieve a forward-looking agenda,” Schumer said in a statement earlier this month after victory was declared for Ossoff and Warnock.

Harris also appointed Sen. Alex Padilla (D-Calif.), her replacement in the upper chamber, after she and President Joe Biden were sworn into office.

Currently, the Democratic caucus in the Senate has 50 seats to Republicans’ 50, meaning that Harris—as vice president—is the tie-breaker, thereby giving the Democrats control.

“America is turning over a new leaf. We are turning the page on the last four years and to reunite the country, defeat COVID-19, rush economic relief to the people,” Ossoff told reporters on Wednesday morning. “That’s what they sent us here to do. And, you know, Georgia has sent a young Jewish man and a Black pastor to represent our state in the U.S. Senate. It’s a sign of generational and epochal change for our state.”

Harris also swore in Sen. Patrick Leahy (D-Vt.) as Senate pro tempore, a designation given to the longest-serving member of the majority party. Leahy, who is taking over from Sen. Chuck Grassley (R-Iowa), is now third in the line of succession to the presidency.

Earlier this month, Schumer said that his first priority as majority leader will be $1,400 stimulus payments.

And the New York Democrat said he plans to prioritize the deployment of the CCP (Chinese Communist Party) virus vaccine.

“We have an opportunity to work with our House colleagues and a new administration to defeat the virus, provide the relief the American people need, and reunite the country,” he said in a recent statement this month.

Republicans will still maintain some power in the Senate due to the filibuster rule, which allows a single member to block a vote unless 60 senators vote to close the debate. No Republicans have expressed support for abolishing the filibuster, while some Democrats—including Sen. Joe Manchin (D-W.Va.)—are not in favor of it.

Doug Andres, a spokesman for McConnell, said he “expressed his long-held view that the crucial, longstanding, and bipartisan Senate rules concerning the legislative filibuster remain intact, specifically during the power share for the next two years.”

“Discussions on all aspects of the power-sharing agreement will continue over the next several days,” Andres said.