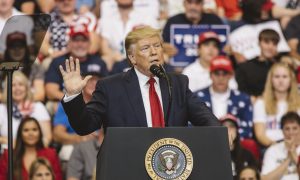 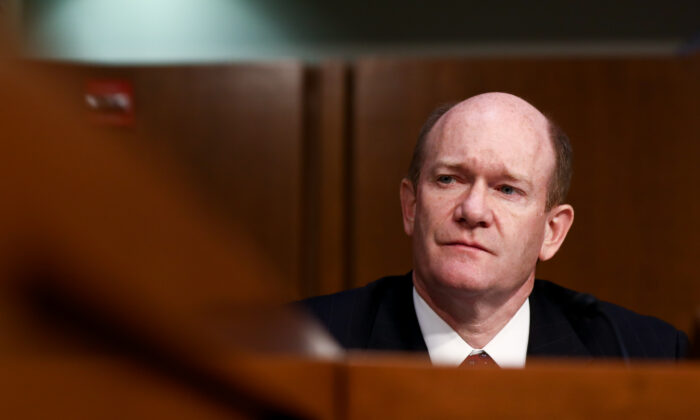 Sen. Chris Coons (D-Del.) listens as Judge Brett M. Kavanaugh testifies before the Senate Judiciary Committee during the third day of his confirmation hearing to serve as Associate Justice on the U.S. Supreme Court at the Capitol in Washington on Sept. 6, 2018. (Samira Bouaou/The Epoch Times)
Politics

Sen. Chris Coons: ‘I Don’t Think There Will Be the Votes’ in Senate on Impeachment

“From what I’ve heard publicly and privately, I don’t think there will be the votes to remove him if this does come to an impeachment trial in the Senate,” he told CNN. “As a senator, the pledge I’m going to take is to weigh all the evidence in front of me,” Coons added.

“I think the challenge now over this Thanksgiving break is for Republican House members and senators to reflect on what role they want to play in this. Whether they want to simply follow the polls and think about what’s perhaps in their best interest at the next election, or think about history and what precedent we’re setting,” Coons remarked.

A number of recent polls show that voters, namely independents, have tuned out the impeachment process following several weeks of public hearings. Republicans and Trump have claimed that witness testimony in the hearings showed that there is no evidence Trump committed a crime or abused his power, as Democrats have alleged.

Coons then said he hopes that Trump, Secretary of State Mike Pompeo, and Chief of Staff Mick Mulvaney testify during the Senate trial.

On Nov. 22, the president told “Fox & Friends” that he would like a trial in the Senate, which would require 67 votes to remove him from office. No president has ever been convicted by the Senate.

“We wanna call the whistleblower … because frankly, I want a trial,” he said. “There should never be an impeachment, that phone call was totally appropriate,” Trump said.

“I want to see Adam Schiff testify about the whistleblower who was a fake whistleblower,” Trump said, adding that the anonymous person’s complaint “bore no relationship” to his call.

Earlier this week, House Judiciary Chairman Jerrold Nadler (D-N.Y.) said in a statement that “our first task is to explore the framework put in place to respond to serious allegations of impeachable misconduct like those against President Trump,” The Hill reported.

Nadler also sent a letter (pdf) to the White House, saying his committee will allow the hearing to provide an “opportunity to discuss the historical and constitutional basis of impeachment, as well as the Framers’ intent and understanding of terms like ‘high crimes and misdemeanors.’”