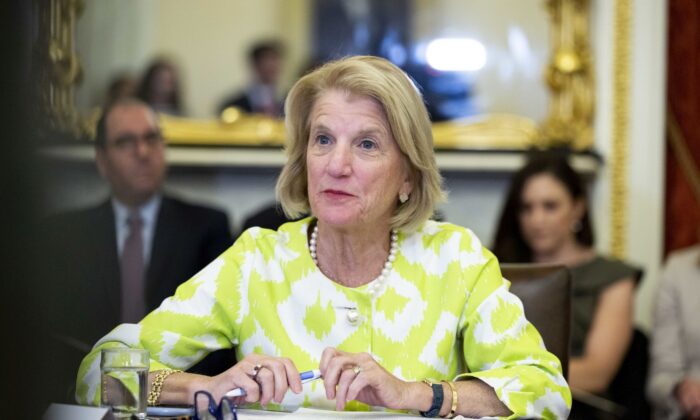 Senator Shelley Moore Capito (R-W.Va.), speaks during a roundtable discussion with the Senate Foreign Relations Subcommittee on the U.S. strategy for implementing the The Women, Peace, and Security Act," on Capitol Hill in Washington, on June 11, 2019. (Anna Moneymaker/Getty Images)
Politics

Sen. Capito on Impeachment: ‘Process Has Not Been What Our Founders Wanted’

Sen. Shelley Moore Capito (R-W.Va.) said the current Democrat-led impeachment inquiry into President Donald Trump is not what the Founding Fathers of the United States had intended.

“I see it as the political blunt instrument that it has been through the entire process,” she told Fox News. “When the hearings were private, it was pretty obvious the Democrats were using this as a way to be destructive to President Trump himself. Then when it comes into the public arena over the past several weeks, I think it’s shown itself to again be a very divisive, very partisan exercise—and discouraging to the American public. And it will probably be coming over the Senate. I will be a juror, so I’m all ears, of course, to figure to that out once it comes onto my plate.”

“I’ll take what Adam Schiff in his own words and the seriousness with which he said it—I think he protests too much in his closing statement because he knows that the facts are not there. The president hasn’t been able to defend himself. The process has been very much not what our founders wanted, not what our rule of law was founded on—but is being used as a divisive, partisan exercise, and it’s not doing justice to our system,” she told the news outlet.

If and when impeachment comes to the Senate, Capito said she will be “all ears” but described it as “partisan.”

Before the Thanksgiving holiday, Democrats announced that the inquiry would be turned over to the House Judiciary Committee, with hearings slated for Dec. 4.

The Intelligence Committee is wrapping up the investigative phase of the probe and preparing its report. Schiff stated that the report could be released soon after the House returns from its Thanksgiving break.

Judiciary Chairman Jerrold Nadler (D-N.Y.) said in a statement that “our first task is to explore the framework put in place to respond to serious allegations of impeachable misconduct like those against President Trump,” The Hill reported.

Nadler sent a letter (pdf) to Trump and said his committee will allow the hearing to provide an “opportunity to discuss the historical and constitutional basis of impeachment, as well as the Framers’ intent and understanding of terms like ‘high crimes and misdemeanors.’”