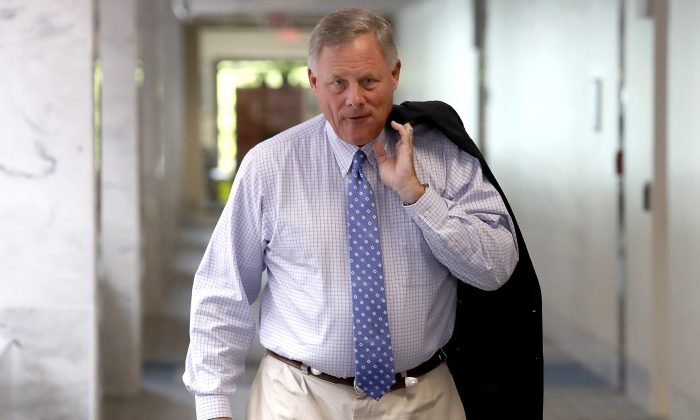 Sen. Richard Burr’s (R-N.C.) brother-in-law sold stocks on the same day the senator did, according to newly released documents.

Fauth is a board member on the National Mediation Board, a U.S. government agency that helps resolve labor-management disputes in the rail and airline industries. The board, reached by The Epoch Times, said it and Fauth have no comment at this time.

Fauth, who is married to Burr’s sister Mary, was appointed to the board by President Donald Trump in 2017.

The stock sale disclosure forms were obtained by Luke Brindle-Khym, a partner and general counsel of New York-based investigative firm QRI. He shared them with ProPublica, which published them online.

Brindle-Khym estimated that Fauth avoided losing between $37,000 and $118,000 by dumping the stocks when he did, just before the COVID-19 pandemic seriously hit the United States.

Burr’s office didn’t immediately respond to a request for comment.

Alice Fisher, an attorney representing Burr, told the outlet, “Sen. Burr participated in the stock market based on public information and he did not coordinate his decision to trade on Feb. 13 with Mr. Fauth.”

Burr sold stocks in February after receiving sensitive briefings on the CCP (Chinese Communist Party) virus, a novel coronavirus that causes COVID-19, as did several other U.S. Senators.

While most of the lawmakers said others completed the sales, Burr said he made the decision to sell himself, relying “solely on public reporting,” including reports from CNBC.

Burr has called for the Senate Ethics Committee to probe him.

Ethics Chairman Sen. James Lankford (R-Okla.) hasn’t announced whether a probe will be conducted, nor has Ethics Ranking Member Sen. Chris Coons (D-Del.). Neither returned requests for comment. The FBI and Securities and Exchange Commission, which were reportedly investigating Burr’s sales, declined to comment on the reports.

Burr has faced questions from within his own party.

“I think Senator Burr owes everybody in North Carolina and the United States an explanation, and we’ll see where the investigation goes,” Sen. Thom Tillis (R-N.C.) said last month.