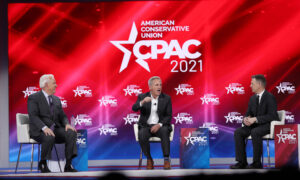 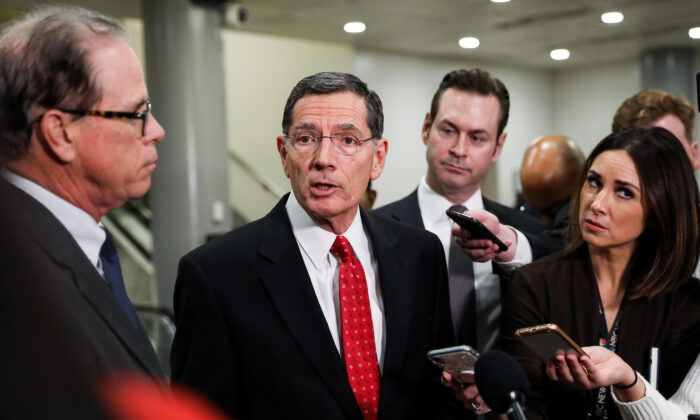 The third-ranking member in the Senate Republican leadership said last week that his party wants to make sure President Joe Biden is a “one-half-term president” by reclaiming majorities in the U.S. House of Representatives and Senate in 2022.

“I’m looking forward to a very successful 2022.  You know, Mitch McConnell has come under a lot of criticism for saying he wanted, at one point he said he wanted to make sure that Obama was a one-term president. I want to make Joe Biden, a one-half term president,” Barrasso said at the June 10 event.

He went on to say that Senate Majority Leader Chuck Schumer (D-N.Y.) and House Speaker Nancy Pelosi (D-Calif.) set the policy agenda and control what legislation gets voted.

“He’s not going to get anything he doesn’t agree to to sign, he’s just along for the ride right now and they’re running the show, and the party is being driven further and further to the left,” said Barrasso, referring to President Joe Biden.

“We believe in free markets, limited government, individual freedoms, national security, and the traditional values of America, and we see a different party on the other side of the aisle, which really is a party of socialism. It’s freedom or socialism,” added Barrasso.

Currently, Democrats hold a slim majority in the House with 220 Democrats, 211 Republicans, and 4 vacancies. The Senate has an even split of 50 senators from both parties with Vice President Kamala Harris serving as the tie breaker.

Both parties are hard at work raising money for the mid-terms and laying the groundwork for an expensive and confrontational campaign cycle for 2022.

Other factors that could play into the number of seats gained or lost by each party are population shifts in each state due to pandemic restrictions, job losses, and redistricting.

Stefanik said she continues to see that Trump’s America First policies still resonate with voters in her district and working-class districts across the United States. She has been credited with growing the number of Republican women in her party during the 2020 cycle when she was chair of the Elevate PAC (a Republican PAC to promote Republican women candidates) and is hopeful that the momentum will continue with 2022.

During a May interview with Steve Bannon, Stefanik said the GOP continues to grow and bring in more women.

“Most of them are very conservative women who are going to be really important voices, whether it’s from California to Texas to Iowa to Michigan, so I’m very excited about those rising stars,” she said.