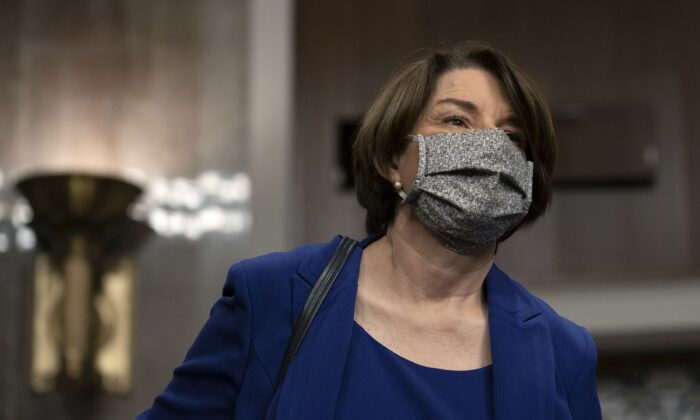 Sen. Amy Klobuchar (D-Minn.) on Thursday revealed she was diagnosed with breast cancer earlier this year but says it was treated successfully.

Klobuchar, 61, said in a blog post that doctors at the Mayo Clinic found small white spots during a routine mammogram and a subsequent biopsy at the Piper Breast Center in Minneapolis showed she had Stage 1A breast cancer.

Klobuchar underwent a lumpectomy on her right breast at Mayo. Later, she completed a course of radiation treatment.

“Of course this has been scary at times, since cancer is the word all of us fear, but at this point my doctors believe that my chances of developing cancer again are no greater than the average person,” the third-term senator wrote.

She thanked her doctors and nurses for their work and her family and friends for their support.

Klobuchar called attention to how many people have been delaying routine examinations like mammograms due to the COVID-19 pandemic, saying she delayed hers.

“It’s easy to put off health screenings, just like I did. But I hope my experience is a reminder for everyone of the value of routine health checkups, exams, and follow-through. I am so fortunate to have caught the cancer at an early enough stage and to not need chemotherapy or other extensive treatments, which unfortunately is not the case for so many others,” she said.

The United States Preventive Services Task Force recommends women between the ages of 50 and 75 get a mammogram, or an x-ray of the breast, every two years.

Women younger than 50 should talk to their doctor regarding potential mammograms.

Klobuchar first entered the U.S. Senate in 2007. She was the district attorney of Hennepin County before that.