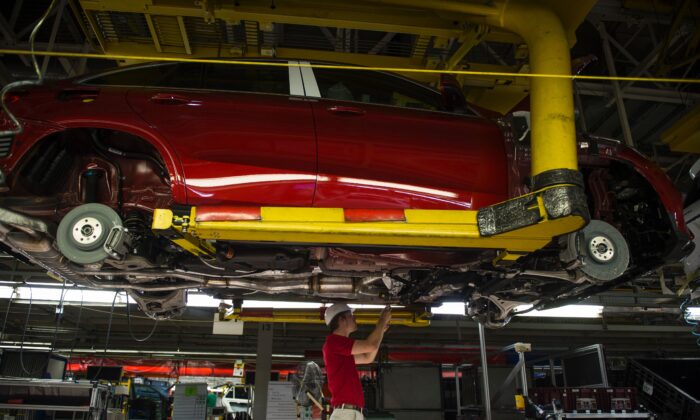 An employee installs parts on the undercarriage of a Mercedes-Benz GLS-Class SUV at the Mercedes-Benz US International factory in Vance, Alabama on June 8, 2017. (ANDREW CABALLERO-REYNOLDS/AFP via Getty Images)
Economy

The U.S. auto industry is expected to lose $210 billion in revenue this year, according to the latest forecast by the global consulting firm AlixPartners, which projects a “multitude of extraordinary disruptions” in the industry.

The industry is facing a loss of 7.7 million units of vehicle production, double the loss of a May forecast AlixPartners projected because of an ongoing semiconductor shortage worldwide.

Semiconductors control everything from airbag deployment, to emergency brake assistance, and computer management of engines related to fuel economy and performance. Without chips, production of automobiles can’t be completed, leading to a shortage of products, and available parts needed for repairs.

The current semiconductor shortage is a result of a combination of factors related to supply and demand, Marketplace reports.

During the state shutdowns last year, more people bought computers, smartphones, and electronic devices, causing a demand for chips to be built for the tech industry. While demand went up for chips, supply went down, as it normally would, but was also impacted by weather conditions outside of the industry’s control.

A major chip supplier in Japan had a fire, halting chip production. Intel, based in Texas, had issued related to the mid-February freeze that hampered operations. In July, Intel also restructured its operations after announcing delays in its 7nm processes, ZDNet reported.

And Taiwan, one of the largest chip producers in the world, is suffering from a drought, impacting chip production, which requires a lot of water. The Taiwan Semiconductor Manufacturing Co. announced its supplies would remain constrained until at least 2022.

“Of course, everyone had hoped that the chip crisis would have abated more by now, but unfortunate events such as the COVID-19 lockdowns in Malaysia and continued problems elsewhere have exacerbated things,” Mark Wakefield, global co-leader of the automotive and industrial practice at AlixPartners, said in a news release.

“Also, chips are just one of a multitude of extraordinary disruptions the industry is facing – including everything from resin and steel shortages to labor shortages,” he added. “There’s no room for error for automakers and suppliers right now; they need to calculate every alternative and make sure they’re undertaking only the best options.”

Dan Hearsch, an AlixPartners managing director, said, “There really are no ‘shock absorbers’ left in the industry right now when it comes to production or obtaining material. Virtually any shortage or production interruption in any part of the world affects companies around the globe, and the impacts are now amplified due to all the other shortages. That’s why it’s critical that companies be armed with good information and analysis, to begin with, and that they follow through with flawless, determined execution.”

The result has been companies announcing they are cutting production. General Motors recently announced it was cutting production at six North American assembly plants. Its president, Mark Reuss, said that he expected the global supply of semiconductors to stabilize but not enough to help automakers rebuild their inventories.

“We’re going to see a stabilization to some extent before we see getting the volume that we really need,” he said. “We’ve got an inventory hole that then got exacerbated by the chip shortage.”

Stellantis NV, Chrysler’ parent company, announced it was cutting production at three facilities in the U.S. and Canada. Ford announced it was temporarily shutting down its Kansas City assembly plant, according to CNBC.

Toyota has announced it is cutting production by 40 percent in its Japanese-based assembly plants and roughly 60 percent of its production at its North American-based plants.

The Commerce Department is now requesting companies to voluntarily fill out questionnaires so the department can determine where bottlenecks, shortages and possible hoarding is occurring.

But if the industry doesn’t comply, she said, the agency could invoke the Defense Production Act, Bloomberg News reported.

“What I told them is, ‘I don’t want to have to do anything compulsory but if they don’t comply, then they’ll leave me no choice,’” she said. “I said today we’re evaluating all of our options right now, all the tools. I hope not to go there but we need to see some progress and we definitely need compliance.”

U.S. companies lead the world in chip design, but the majority of semiconductor production, 80 percent, takes place in Asia. The Democratic multi-trillion-dollar infrastructure package includes a $50 billion investment in critical technologies, including semiconductors. An April budget request also includes $150 million for two new manufacturing programs, one of which would prioritize manufacturing semiconductors in the U.S.