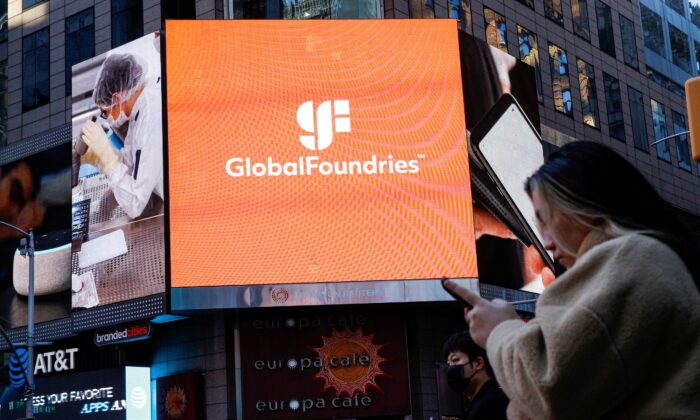 A screen displays the company logo for semiconductor and chipmaker GlobalFoundries Inc. during the company's IPO at the Nasdaq MarketSite in Times Square in New York City, on Oct. 28, 2021. (Brendan McDermid/Reuters)
Commodities

The semiconductor industry is registering impressive numbers for 2021 and 2022, even as global shortages persist, and the scarcity points to the significance and critical importance of chips for numerous end products from cars to appliances and phones.

Combined sales from the industry topped $500 billion last year and are expected to reach nearly $600 billion in 2022. The steady increase in demand has prompted experts in the sector to predict the industry will reach $1 trillion in sales within a decade.

Reliance on technology surged during the pandemic as education and work went online with semiconductor manufacturing already constrained by a supply chain crunch that has yet to be resolved. The absence of critical chips weighed on the production of hundreds of billions of dollars worth of end products.

Based on data collected by analysts, the chip shortage during the past two years has resulted in losses amounting to $500 billion spread among the manufacturers and semiconductor producers. Automakers alone lost $210 billion worth of sales last year because there weren’t enough chips.

The semiconductor supply chain crunch isn’t expected to subside during the first half of 2022, with longer lead times anticipated for manufacturers in 2023. There will be a talent shortage as the industry expands outside its traditional hubs of South Korea, China, and Taiwan. Deloitte analysts anticipate considerable evolutionary transformations within the companies, based on changing demands.

Unlike other major worldwide industries such as farming, semiconductor manufacturers are mostly concentrated in a few economies.

The Semiconductor Industry Association, representing 98 percent of chip firms in the United States and nearly two-thirds of non-U.S. chip firms, announced in December that sales for chips remain robust as economies emerge from the pandemic.

The Biden administration recently warned that manufacturers’ current inventory period for critical chips had dwindled to five days, compared to a 40-day supply in 2019.

According to Pennsylvania-based Susquehanna Financial Group, the average waiting period for chips now tops 25 weeks, which is well past the normal range of 10 to 14 weeks.