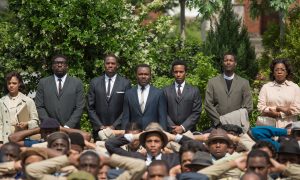 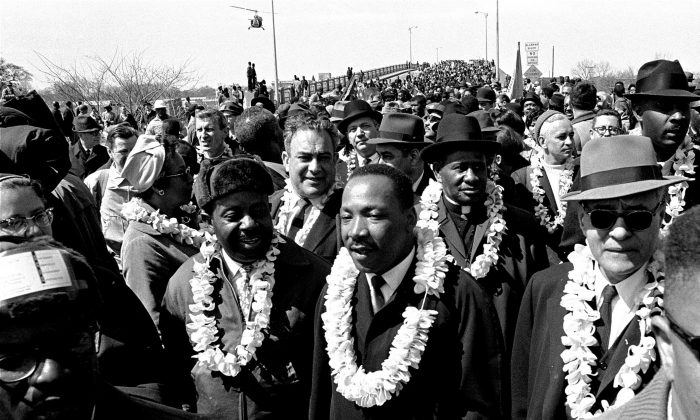 FILE - This March 21, 1965 file photo shows Martin Luther King, Jr. and his civil rights marchers crossing the Edmund Pettus Bridge in Selma, Ala., heading for the capitol in Montgomery. The 50th anniversary of the historic civil rights marches in Selma and the hit movie that tells the story are expected to bring thousands of visitors to this Alabama city. Tourists can retrace history by walking across the Edmund Pettus Bridge to a park and the National Voting Rights Museum on the opposite side. (AP Photo/File)
US

Selma Dreams: Past, Present and Future

Last week, I was invited to serve as keynote speaker for a Black history program for secondary school students, under the theme of Dreams: Past, Present and Future. As I considered a variety of topics under the broad parameter, I quickly settled on the historical significance of Selma, Alabama. While preparing my remarks, I was concerned that the history of Selma and the Voting Rights Act may not be relevant to a young audience.

Thankfully, the movie Selma, and the Academy Awards given to artists Common and John Legend for their song “Glory,” offered the perfect vehicles for bridging the generational divide. The movie fit squarely into the program’s theme: it was present day depiction of past events that demanded the future behavior of voting. I also shared with the students that I wrote an article in 2013 titled Selma: The Future Journey of Footsteps Past, and I read them some of the excerpts below:

“On March 3, 2013, the next morning-Sunday-we traveled to Selma for the Bridge Crossing Jubilee commemorating the “Bloody Sunday” march to Montgomery. Having visited Selma for the first time, I was amazed to learn that the size of the city belies its historical significance … After the service concluded, the congregation joined others already standing outside for the re-enactment of the march. After the crowd had grown appreciably, we began to walk.

As we walked toward the Edmund Pettus Bridge, I thought about the marchers of the Voting Rights Movement in 1965.They must have been filled with fear, determination, and anxiety, unlike the joyous excitement, and the celebratory sounds of drums that surrounded us as we continued to retrace the steps of the past … Soon we heard speeches from a variety of elected officials, civil rights icons, the Attorney General, and the Vice President.

After the last speech, someone on stage began to sing a familiar civil rights song, as the crowd sung along, and proceeded to the bridge. As I turned around and saw thousands of people, I thought about John Lewis and the 1965 marchers. How could they have mustered the courage to stare down dogs struggling fiercely against their owners’ leashes, for the freedom to gnaw the flesh of those seeking democracy’s promise? Why didn’t the fear of state-sanctioned billy clubs make the marchers run from the possibility of liberty, and flee to the certain, familiar ground of dependency?

As we walked across the bridge, most of us were capturing the march through pictures or videos, and the media were scattered throughout the crowd recording our experience. The joyous smiles of the marchers were consistent with a sentiment of celebration because while we knew others suffered tremendously in the past, in 2013 we are enjoying the harvest their struggles. In searching for photographs, I came across a souvenir publication from Selma’s National Voting Rights Museum and Institute. The front cover of the publication speaks volumes about our future. On the cover page is an iconic picture of Dr. King marching next to his wife, Coretta, alongside John Lewis and others. The caption reflects the resilience of footsteps past: “1965: Voteless Then, Never Again!”

I reminded the students that this year marks the 50th anniversary of the passage of the Voting Rights Act. I also informed them that as young people, and citizens, it is their civic duty to participate as architects in the great society of America. I concluded my speech by asking the students what could they do, now, and in the future, as young people to fulfill the dreams of people like John Lewis and others. They responded loudly “Vote!”

The legacy of Selma endures.

Laverne Lewis Gaskins is an attorney practicing law  in Georgia.