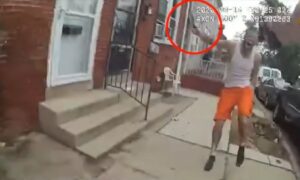 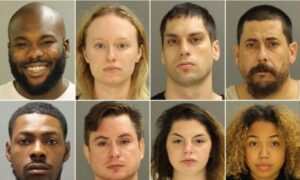 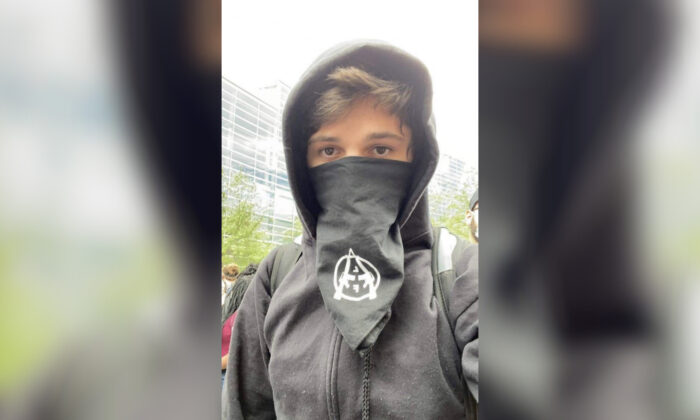 An anarchist identified as Brian Jordan Bartels was captured on video damaging a police car in Pittsburgh, Penn., on May 30, 2020. (Pittsburgh Bureau of Police)
Crime and Incidents

A Pittsburgh man pleaded guilty on Sept. 21 to a charge of obstruction of law enforcement during civil disorder for damaging then setting a police car on fire during protests over George Floyd’s death in May.

Brian Jordan Bartels, 20, surrendered to police in June after he was captured on video damaging a police car during protests in Pittsburgh, Pennsylvania, on May 30. He had been accused of spray painting the marked police SUV with the letter “A” and smashing its windshield, federal prosecutors said.

Bartels was captured on video—wearing black clothing and a black facial covering with an anarchist symbol emblazoned across it—smashing windows of a police van during a protest that had been peaceful. Prosecutors said some people in the crowd began cheering him on, and some people joined him in damaging the car. At one point, Bartels jumped off the hood and attempted to break the passenger-side window of the car.

“As Bartels continued his destruction the crowd fought back against him less and more people began to join him in damaging the car,” according to the criminal complaint obtained by The Epoch Times.

During an interview with investigators, Bartel admitted to his criminal acts and expressed remorse. He was charged with a federal offense and indicted by a grand jury, prosecutors said.

“On May 30, 2020, Brian Bartels incited the largest and most destructive riot in Pittsburgh history since 1968,” U.S. Attorney Scott W. Brady said in a statement. “Armed with his homemade agitator toolkit, this self-identified extreme left-wing anarchist came to the protest in downtown Pittsburgh that day with one goal: to incite violence.

“Bartels succeeded—he was the first to incite violence during the protest. While protesters yelled for him to stop, Bartels spray painted and then smashed and jumped on the windshield of a Pittsburgh Police cruiser. Others then joined in and the cruiser was set on fire and destroyed.”

Brady said that Bartel’s actions represented “the inflection point” during the protests, which he said went from peaceful to lawless.

Bartel is scheduled to be sentenced in January 2021. He could face up to a maximum sentence of five years in prison, a fine of $250,000, or both.

In the wake of Floyd’s death, people took to the streets across the nation to protest against police brutality and called for a reform in policing policies. Officials say that while many of the demonstrations were peaceful, some cities such as Portland, Oregon, and Seattle, Washington, saw violent rioting and looting that caused widespread property damage and injuries, as well as deaths.