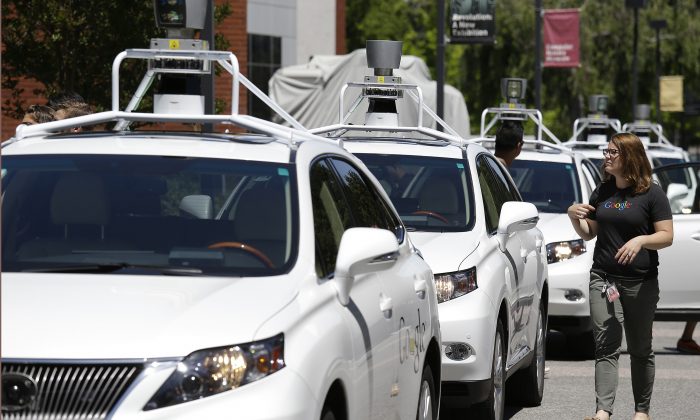 A row of Google self-driving Lexus cars outside the Computer History Museum in Mountain View, Calif., on May 13, 2014. (Eric Risberg/AP)
UK

Cars, lorries, and coaches with self-driving features could be operating on Britain’s motorways next year and fully autonomous vehicles could be a feature on the roads by 2025 under plans unveiled on Friday.

The Department for Transport, which is injecting £100 million worth of investment, published a policy paper that said the self-driving vehicle industry could create up to 38,000 jobs and be worth £42 billion to the UK economy.

Transport Secretary Grant Shapps said: “The benefits of self-driving vehicles have the potential to be huge. Not only can they improve people’s access to education and other vital services, but the industry itself can create tens of thousands of job opportunities throughout the country. Most importantly, they’re expected to make our roads safer by reducing the dangers of driver error in road collisions.”

The DfT said vehicles that could drive themselves on motorways could be on sale by next year and fully autonomous buses and delivery vans could be on the roads by 2025.

The government said it believed self-driving technology would help people who had not learned how to drive or were elderly and disabled, and would also improve road safety by removing the element of human error. Unlike humans, computers do not suffer from fatigue or lapses of concentration.

The DfT said £34 million would be earmarked for research into how driverless cars perform in bad weather and how they interact with pedestrians, cyclists, and other vehicles.

Business Secretary Kwasi Kwarteng said: “Self-driving vehicles have the potential to revolutionise people’s lives, particularly by helping those who have mobility issues or rely on public transport to access the jobs, local shops, and vital services we all depend on.”

In June, the House of Commons Transport Select Committee said it was launching an inquiry into the potential implications of self-driving vehicles on Britain’s roads.

Many modern cars are already fitted with automatic emergency braking systems—which override the driver—and other forms of “assisted driving” but last month the Alliance of British Drivers urged the government not to go further and make Intelligent Speed Assistance (ISA) technology mandatory in all UK vehicles.

Some versions of ISA bypass the driver and automatically reduce the speed of the car if he or she is exceeding the speed limit.

The president of the AA, Edmund King, welcomed the government’s initiative but said: “It is quite a big leap from assisted driving, where the driver is still in control, to self-driving, where the car takes control. It is important that the government does study how these vehicles would interact with other road users on different roads and changing weather conditions.

“However, the ultimate prize, in terms of saving thousands of lives and improving the mobility of the elderly and the less mobile, is well worth pursuing,” he added.

A number of companies, including Mercedes, General Motors, Amazon, and Google, are trialling self-driving cars. Tesla said earlier this year automated car navigation software was one of its main priorities.